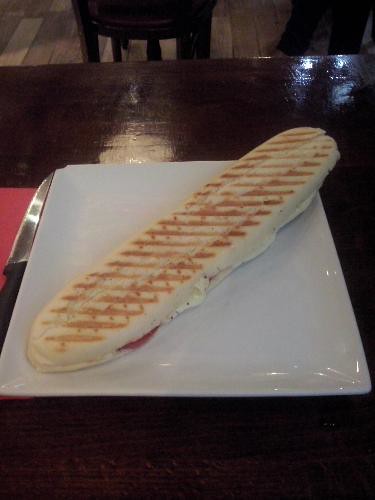 I emerge from the underground station. The rain is falling harder than ever. I walk, or rather run, because I have no umbrella, to the entrance—that being the famous pyramid shaped structure I’m sure we can all imagine. I walk through a crowd of people, wondering why they are not going in. I see a sign. I read it: “The Louvre is closed on Tuesdays”. That sign may just as well have said: “Tourist Go Home!”or perhaps something more vulgar.
Disappointed, I wander about aimlessly in the rain until my stomach gives me a reason to take action. I enter an establishment called “Cafe du Musee”, silly idea in the first place, and something I would normally be wiser about, notwithstanding several events that may have impaired my socially responsible willpower that day. Here I purchased a “Roma” Baguette which consisted of melted mozzarella cheese and tomatoes on bread (ironically, I am writing this blog entry in the city of Roma, Italy, where I’m quite sure such an item is nowhere to be found on any menu). What my sense was lacking to make me order such a thing, that sandwich was lacking in flavor (see photo above). And not to mention I was charged an outrageous price for the privilege of eating in close proximity to a closed museum, whose very proximity nonetheless was at this moment filled with rain making it imperceptible in the case that I actually though it would be somehow pleasurable to view it while eating.
All of this happened before 4pm.
Countless other subtle yet disheartening things happened to me that day, although the sun eventually came out and I did make one good friend (who I may never hear from again in another regretful turn of events), and I finally arrived home the next day at 5pm. I limped my way into the residence hall, feet now blistered from so much aimless walking, and took the elevator to my flat on the fourth floor (always previously having walked up the stairs), and collapsed on by bed in defeat. I took on Paris, and Paris destroyed me. This famous city, one so idolized in film and media and by people all over the world, had been a ruthless adversary. For the first time in the past nine months, I was defeated.