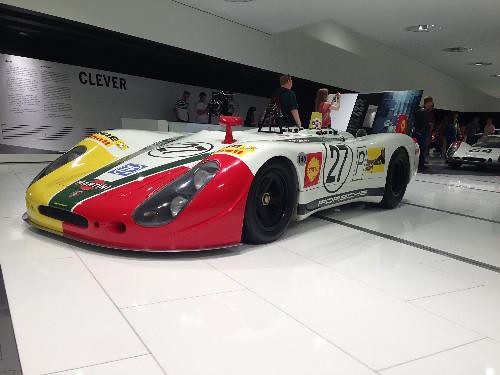 Yesterday we woke up pretty early and get ready to head to Stuttgart for a nice day trip. It was about a 2-hour train ride from Munich that was covered by our rail pass. Stuttgart is the home of many automotive factories and museums, most known for Porsche and Mercedes.

Porsche was our first stop and to our surprise museum entry was free on this day! However, even if it wasn’t free, the museum entry is only €8 for adults or €4 with a student ID. The whole museum was redecorated for the Le Mans 24-hour race and because of this they had plenty of free giveaways like Porsche flags and posters.

As soon as I walked up to the entrance I knew this was going to be awesome. The outside was set up like a racetrack with many of Porsche’s racecars that they have produced over the years. The whole setup of this museum was perfect in my opinion. They gave us a headset that acted as our personal tour in English. As we went to each attraction we could enter its number to find out some more information about what we wanted and move along as we pleased. This made it so the tour would not be long and drawn out like some other can be, instead we picked exactly what we wanted to hear about.

It started with the first Porsche design ever and worked its way up through the years showing the growing engine technologies, public models, and various racecars they had produced dating back as far as the late 1800’s. I am huge into cars and it was awesome being able to see the start of such an amazing car company, learning more about their history, and seeing their progression over there years. One of my favorite aspects of this museum was the fact that they did not focus very much on the new cars that we can just see on any Porsche dealership lot. Rather, they put a much stronger emphasis on the start of this company and their involvement with racing. I was able to see Porsches that I did not even know existed and get a good grasp on their history.

The Mercedes museum was next and this one only costed €2 for students since we did the later tour for 4:30-6, otherwise it would have been €4 for students which is still very cheap. Mercedes was very nice as well, but in my opinion it was not setup as nicely as Porsche. The Mercedes museum seemed much more elegant and rich from the outside, rather than the racing persona that Porsche gave. The museum consisted of 8 floors of cars with 2 main display rooms on each. The beginning of the tour started off similar, showing us their first engines and cars that were developed in the late 1800’s. However, after this the rooms seemed very disorganized with very little rhyme or reason. It was great seeing the older models and their commercial models that I was not aware of, but it just did not strike me as interesting as the Porsche museum. They tried to focus more on their status and the famous people that have owned their cars rather than the company’s passion for making cars like Porsche did. However, at the end of the day, both museums were awesome and definitely worth the 2-hour train ride if you are into cars.