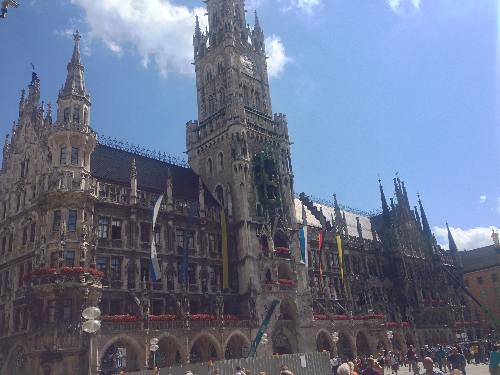 On our final day in München we were finally able to find a city tour that worked for us. Before hand, we were told about a tour company called “New Europe” that offers free city tours all over Europe. At the end of the tour, if you genuinely liked the tour at the end you are encouraged to tip the guide. Setting up tours in this fashion is a much better approach in my opinion. You never really know what you are getting yourself in for on a tour that you pay for. However, when the tour guides commission is solely from tips based off of how well he showed you around, he is much more encouraged to give you the best tour possible.

The tour began at the famous Rathaus-Glockenspiel, which is a major tourist attraction of München. This is a very elegant clock tower that has characters at the time that rotate on a platform reenacting a scene every hour. Apparently this is rated 2nd on the list of tourist attractions that are the biggest let down. Regardless, I still found it very cool.

The guide continued to take us around the city telling us a lot of the important history of München as we walked from attraction to attraction. He took us to a few well-known places such as Marienplatz and the Münchner Dom. At each place we learned the significance of it. For example, story has it that the Münchner Dom was built is only 20 years, record time in this era, due to the architect making a deal with the devil. Supposedly, after the completion the devil realized that he had been tricked by the architect and was so furious that he stomped on the floor of the church and flew out, forever leaving his footprint in the floor and making the alleyway windy.

The tour was ended at the Field Marshals Hall, which was where Adolf Hitler used to give many of his speeches during the Nazi’s rule. He also showed us where there used to be a monument and plaque for him, but was rightfully torn down shortly after the Nazi fall.

After this we made our way to the Englischer Garten which is another one of the more well known beer gardens of München where we had another delicious lunch and locally brewed beer.

One of the most interesting things that I noticed about München is how bland some of the buildings were and the vast differences in architecture style. This is because during the World Wars München took some heavy hits to its economy and architecture from war strife and multiple bombings. They attempted to rebuild a lot of the structures to what they once were, but because of the huge gap is time it was virtually impossible to perfectly match the architecture styles.