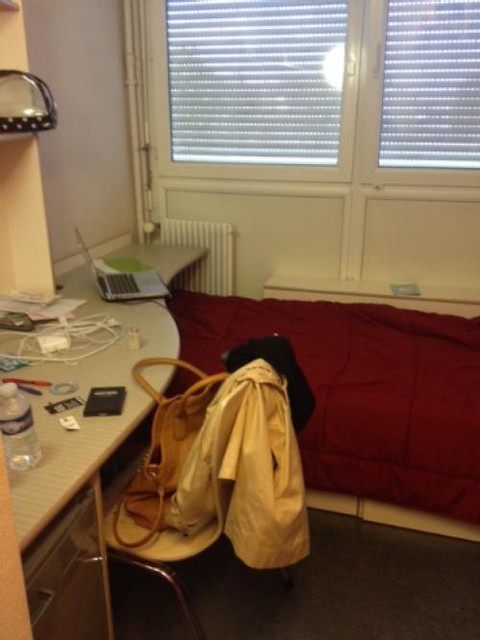 Je m’appelle Greta! I am a third year Drexel Student, who is currently studying abroad at the Sciences Po Collège Universitaire Euro-Américain à Reims. This small Sciences Po campus is located in Reims, France, a small city, which is found approximately an hour from Paris.
I arrived to Paris on August 27th via a direct flight from Philadelphia. Then, I was able to take a train directly from the airport to the Champagne-Ardenne region of France, after a quick transfer, I found myself in Reims. I took the TGV, which was nice and quick, but a bit more expensive. From the Reims train station, I quickly grabbed a taxi. The train station and centre-ville in general are not far from the Sciences Po campus or the residences, but it was more convenient for me to take a taxi, since I had luggage with me.
I am staying in a CROUS residence, which is much more affordable than private housing in Reims. CROUS provides student residences across France. The application process was a bit tedious, but Sciences Po Reims had administrative workers help with the process and act as liaisons between the students and CROUS. It is important to note that students should arrive during business hours, or else they will have to wait until the next day to move into their rooms or studios. The CROUS residence, in which I am staying in, only offers rooms. They are single rooms with private bathrooms. The rooms are very different from rooms in the United States, which was an adjustment at first, but I quickly grew to embrace the change.
The bathroom is extremely small. The sink and shower run by pushing in the knob and the water runs until they come to a stop automatically. As a result, when showering, it is necessary to keep pushing it to keep the water running. In addition, in order to turn the lights on, it is necessary to put your key into a black box. When the keys are removed, the lights turn off automatically. There is a mini fridge in the room and a common kitchen on the every floor. However, the common kitchen has burners, counterspace, and a long table for dining. Overall, I really like the CROUS rooms because even though they are different than rooms found in American residences, they are enough space for one person.
More to come in regards to my travels, orientation, and getting to know the campus!