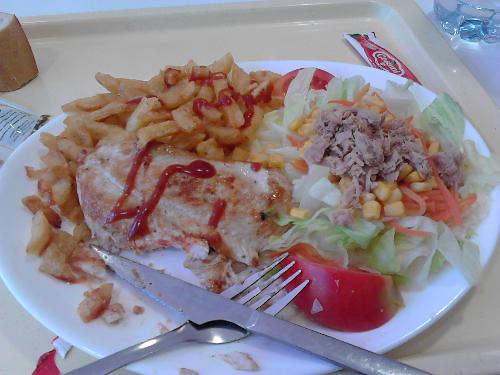 There are various cultural differences that I have noticed from being in Spain for only eleven days but “siestas” continually grab my attention. The word is used very often on and off-campus. Before coming to Spain, I was aware of the concept of a “siesta.” The term was introduced to me while studying Spanish at Drexel. It was defined as an authorized afternoon nap for employees. Now that I am in a country that recognizes it, it is easy for me to feel compelled to view it as a privilege, considering that employees are given the opportunity to leave work for about two hours and it is considered a “break.” Although most jobs in the United States offer breaks, they are most likely twenty minutes or less; furthermore, the idea of a long break in the United States can be portrayed as the “break” Americans are given between the time that their work shift ends and when it starts the next day.
Also, before coming to Spain, I would not have imagined that siestas are embedded in Spanish culture. Hence, it is not an optional “privilege” but very customary. Businesses are temporarily closed during the middle of the day. The businesses that I have seen close around 2:30pm, reopen at 5pm and officially close around 9 or 9:30pm. While walking in Madrid around 2:30pm, I have witnessed store owners closing their shops and walking towards the closest metro station with friends. I also had the chance to witness a shop preparing for its afternoon break while applying for a student public transportation pass.
What I didn’t know about siestas is that it is followed by an afternoon meal. I previously thought that employees were allowed to go home to rest during the middle of the day due to weariness. I learned that siestas are taken after an afternoon meal. Moreover, lunch is the most important meal of the day for Spaniards. It is eaten usually around 2 p.m., usually with friends and/or family.
This is my first week at Comillas and today I had a two hour break from 12:30 to 2:30pm, which is during the ideal times Spaniards have lunch. I decided to have the “most important meal of the day” for Spaniards today. I ordered “un filete de pollo con papas fritas y una ensalada (a chicken filet with fries and a salad).” I ordered this in particular because I thought that the use of the word “un filete” had to be an exaggeration, considering that the price for the meal was only €4.70 (approximately $6.09). Apparently, it was not an exaggeration. I had to finish a large serving of food in less than 35 minutes. No wonder the siesta is two hours!