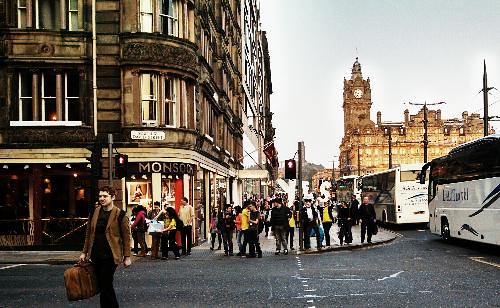 Today is the day. Today is the day that Scotland has been waiting for centuries to happen. Scots are voting this evening, if thy haven not already, for or against independence from the United Kingdom. The country has been keeping the referendum campaign very short and simple. Citizens are either voting YES or NO. Dozens of posters are hanging from the windows saying YES in bright blue or NO in red (Blue for the color of the Scottish flag and red for England’s flag’s color) It is remarkable to see that the country, according to the last published poll a week ago, is completely split in half about the decision. Some people, a part of the No campaign, are striving to keep the union together, chanting what revolutionaries during our time of independence said, “United we stand, divided we fall.” The other people, on the Yes side of the debate, are chanting the words, “Hope, and not fear.”
I’ve noticed that many people from the Yes side are more liberal generally from those on the No side. They are also more passionate. While the No side is chanting about the United Kingdom being wonderful as it is, the Yes side disagrees and wants the power for Scotland’s people to decide what is right for Scotland. The No side seems to always reference the mysteries that will ensue from breaking off from England and the whole United Kingdom. They want things left how they are right now and are unsure of what will happen if a Yes vote does indeed occur tonight. Hence, why the Yes campaign takes advantage of the slogan, “Hope, and not fear.”
What amazes me more about this referendum is that Scotland will become a guide or example of how things are done for other countries that want independence from imperial powers. The world will be looking at what decision Scotland has made tonight for sure. I am so proud and lucky to have been here during history.
While America had to endure years of bloodshed and fighting to achieve independence from Great Britain, Scotland has not. One man told me that he was so happy that not one drop of blood was shed during the fight for independence. Not one drop or blood nor the usual election annoyances happened here like they would have in America. What I mean by that is, each campaign worked alone and raised their own money for the most part to hand out leaflets and set up stalls. The obnoxious amount of campaigning done in America during elections did not really happen here. The media only covered minimally what was actually happening and the campaign, while the vote itself was huge, was relatively quiet.
I am still taken back by the courage of the Scottish people to fight for their freedom so wholeheartedly and I cannot tell anyone what the polls are yet, as the news does not cover voting like in America. We all find out at the same time and that time is in about an hour. Tomorrow, I will see if I will wake up in a free Scotland or a truly United Kingdom.