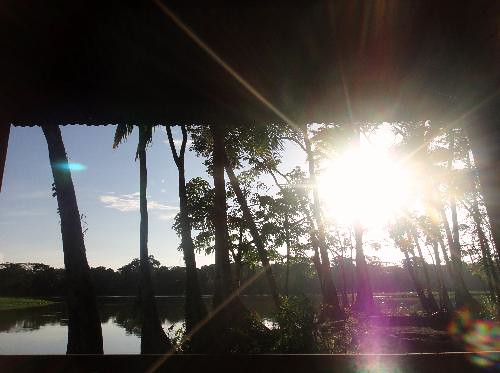 This past weekend was nothing short of awe-inspiring. No words can accurately describe the beauty which surrounded me, but I’ll give it a shot…

ICDS (the exchange program) had set up a group trip for all of us to visit a very remote village to both participate in a service project and visit a turtle conservation site. The location we visited, Pacuare, is only accessible via boat, and after several hours of driving, we all jumped into a small boat and cruised down both man-made and natural canals. Normally, nature is all around you in Costa Rica, but in Pacuare, it completely engulfs you. Our friendly guide for the weekend, Leo, was vigilant in spotting birds, reptiles, and everything in between as we made our way to our home for the weekend. Before we left, we were told we would be sleeping in tents for the weekend, and while that turned out to be true, it also turned out to be so much more.

Where we stayed was a large compound plopped right into the middle of a dense jungle. There were several pre-made tents raised off the ground to avoid bug infestation, as well as an open mess hall, an area to chill in hammocks, and a large open space to play volleyball, fútbol, or ultimate Frisbee (which was our group’s choice)! It was honestly like something out of a fairy tale, breath-takingly beautiful. We got settled, ate some lunch, and then headed (via boat) to our service project. We arrived at a one room school house and met the one teacher of 14 students who was extremely happy to have some eager helping hands. We were working on revamping their “comedor,” or cafeteria. So, we scrubbed the building clean, bleached it a bit for sterilization, and then painted the whole building a bright, cheery blue. ICDS has been bringing students here for the past several years to help maintain and support the small school, and it was amazing to see the work of other students before us. Even though our contribution was relatively small, it was really rewarding to be able to support those kids in any way possible.

After we finished painting, we headed (again, via boat) to a turtle sanctuary. The canals en route were so small that our boat was stuck a few times, but we made it eventually without much delay. The sanctuary was tucked way away, but again, the scenery and greenery were stunning. We had been told there was a possibility of actually getting to see turtles hatching, so we were all abuzz with excitement. When we got to the beach, however, we were told by one of the volunteers (the hatchery is run entirely through volunteer efforts) that the majority of the turtles had already hatched. While it was somewhat upsetting, we were told that this year was particularly successful in helping the turtles to hatch, so we couldn’t be too upset. If nothing else, it was exciting to see how so many people are so dedicated to helping these endangered species survive.

However, the highlight of my weekend (by FAR) came on our return journey. We decided to leave Pacuare with ample time to explore the canals for wildlife. We initially saw some birds and small turtles, but since we were exploring at midday, most of the animals were tucked deep into the forest to avoid the sun. Then, as all hope seemed lost, we came across.. A SLOTH! A real live sloth in its natural habitat!! I could hardly believe it. Seeing a sloth was one of my main objectives in coming to Costa Rica, and I was NOT disappointed! Our driver stopped the boat and several of us hopped out onto dry land to get a better look (and snap some pics!). We were told it was a 3-toed female sloth, and she was just hanging on a tree, eating, and definitely was posing for us 🙂 I could not have been happier! It was truly a beautiful end to an even more beautiful and unforgettable weekend.