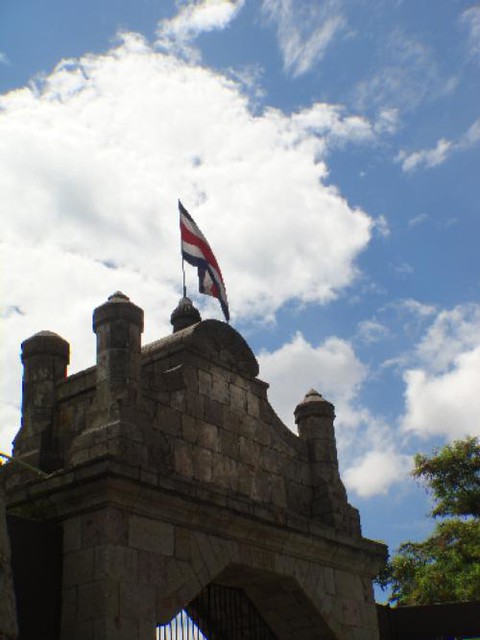 Today, thanks to conflicting professor schedules, we were scheduled to have a 4 hour lecture for our Sustainable Development in Costa Rica class. Our professor, thankfully, opted to take the class on a tour of the city instead of having us sit in a sad, dark classroom for 4 hours. We all met at school promptly at 8AM, boarded a bus to San José, and were off!

We started off our tour at el Museo Nacional (National Museum), which we found out had been a fort at one time and was a very important stronghold during the Costa Rican Civil War. While the war was not very long, only lasting for about 45 days, it brought about supreme changes to the country in the form of a new constitution. This new constitution changed the country’s dynamic in several major ways: it eliminated the national army, granted universal suffrage for ALL, created a fourth governmental body – the electoral body. Costa Ricans truly pride themselves on being a peaceful country without an army. Coming from the U.S.A., I am continually astounded at this country’s ability to thrive on peace and social justice, rather than that of the strong hand.

Next, we moved past the Legislative Building where President Luis Guillermo Solís carries out his duties on a daily basis. Remarkably, we were able to get extremely close to the building; it had no large iron gates around it nor any scary looking guards standing out front to protect it – another departure from the States’ way of dealing with things. Another surprising landmark was the large rock placed delicately across the pedestrian walkway from the building. On it is carved the words “NO TLC” which refers to the tratado de libre comercio, or free trade agreement. For me, this symbolized not only the Costa Rican desire to self-autonomy, but also their acceptance of free speech. Nothing with that harsh of a message would last outside of the White House for more than a few hours.

We continued our tour by walking through some of San José’s beautiful parks and ended up at one of the two public hospitals in the city. We were told that thanks to the government monopoly over the healthcare system, upwards of 88% of the population has full healthcare coverage. That number was incredible to me! 88%! As we are born and raised to believe in the States, privatization is paramount and the government should just stay out of the way. But, we are quickly becoming aware of the inherent inequalities of that system, and it is amazing and heartening to see a country that is able to direct its attention away from the military and towards social health and education.

Our tour rounded out by visiting several hotels which had been awarded the Certification of Sustainable Tourism from the government. The CST is a voluntary program in which attempts to certify tourism companies on their sustainable practices by evaluating them on four fundamental aspects – biological parameters, infrastructure and services, external clients, and the socio-economic environment. While this program is costly, it is a terrific benchmark in determining the sustainability of Costa Rica’s booming ecotourism sector. For our last few moments, we were able to visit into a few shops which pride themselves on fair trade of sustainable practices. One store worked directly with the remaining 8 indigenous tribes in the country by buying artisanal products directly from the natives and paying them upfront fair trade prices for their goods. These products ranged from intricately woven baskets to beautifully detailed ceremonial masks. We will surely make a second trip back.