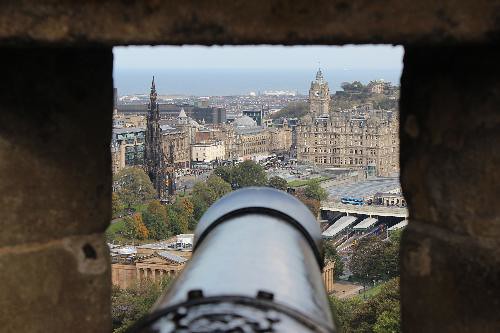 The Edinburgh castle is something everyone should see if they are fortunate enough to visit Edinburgh, Scotland. The reason why is because there is so much history and beauty all intertwined all in one, colossal structure. I could not believe it all when I went there. It was overwhelming.
One of the courses I am taking abroad offered the class a field trip to the castle one day last week. Not to say that I would not have visited the castle if that weren’t one of the perks of my class, but it did make it a whole lot easier to go. As part of my Scottish Culture and Society course the class had to pay a small fee for the trips that were planned for us. We are scheduled to see the castle, Glasgow, and another trip all for the deal of twenty-five pounds. Getting a deal is always great. Included in this fee, I received a free headset during my tour of the castle. I was able to walk through the castle with a headset on that told me more about the castle. I enjoyed that I went with my classmates, mostly other exchange students. We were all able to listen to our headsets and learned an overwhelming amount of information about the castle. We had to walk slowly to absorb it all. Every inch and every corner of the castle had some amount of history worth telling. It was amazing how much took place there. I guess I should have guessed it since it was erected centuries ago, but it still amazed me to learn all of what I did there.
King James the Sixth of Scotland and First of England was born in the castle by Mary Queen of Scots in the 15th century, but before and after that many kings and queens lived there. The royal jewels of Scotland are also in the castle. The fancy scepter, crown, and sword were all tucked away in a room where no pictures were allowed. It was all very exciting to be so close to items that held such value and to objects that, at one point in time, had to be hidden away for centuries. That was only a small portion of the castle. There was still so much to see and I had to get moving. The Royal Scots Grey museum was there and also The Prisoners of War exhibition. Prisoners from America during the revolution were held there. It was all too great to take in for one day and I spent most of the day there. I’ll just have to go another day as well.