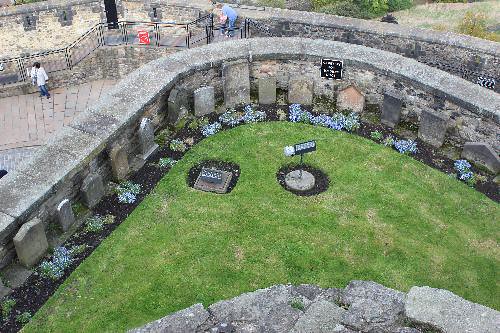 It has come to my attention that in Edinburgh, Scotland, as well as the rest of the United Kingdom, people really like their dogs. I am almost certain that most people in Scotland refer to their dogs as companions more often than Americans do. There is an overwhelming amount of dogs on the street. They are everywhere and anywhere at all times of the day. They are almost as abundant as street performers or musicians in Edinburgh. One difference from those dogs and musicians is that the dogs seem to have a bit more respect from their human counterparts. Dogs are highly regarded around here, as I learned during my visit to Edinburgh castle. I learned that military captains and soldiers love their dog companions more than anyone else in the world. Soldiers put their furry friends on a pedestal, literally. In a small section of the castle, barely noticeable hanging from the wall where the canon is shot everyday at one o clock, is a burial ground specifically for royal dogs and for the dogs who served with soldiers. This pet cemetery is very nice with statues of the dogs themselves above their graves and adorned with flowers. It’s not just these kinds of dogs who get the royal treatment either. Normal pets get special privileges in Edinburgh that I never see American dogs receive.
One thing that is very common here that would normally be frowned upon in America is the allowance for dogs in certain public places. For instance, it is rare that I walk on a bus and not see a dog riding along silently with his owner. Dogs are also allowed into some stores and pubs. I often see dogs without leashes either, which made me nervous at first. I realized, though, that dogs are much more well-behaved here and leashes are not needed for the most part.
I have seen plenty of dogs quietly sitting outside the door of a grocery store waiting patiently for his owner. I have never heard a grown dog bark or howl or even run up to strangers. They never leave their owners side. I think it is a wonderful thing and wish the dogs back home were trained well enough to be able to walk onto a bus without anyone saying anything judgmental or bad about it. I wish we Americans were more accepting of our relationships and bonds to animals as well as the British are too.