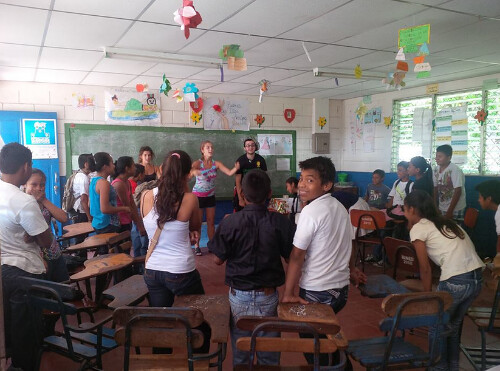 The rest of the trip was far less depressing and actually quite inspiring.

Friday morning we awoke bright and early to make our way to Masaya Volcano! It was my first time ever visiting a volcano, so I cannot stress how EXCITED I was!! The volcano itself is currently dormant but there is an active crater right next to it which continually spews hot gas (we assume some form of sulphur). I was entirely in AWE of my surroundings, a massive volcano, a giant gassy crater, and easily the most stunning view of the country you could imagine. A moment in time I will never forget. We then made our way to a busy craft market with literally hundreds of vendors selling anything and everything. Unfortunately, we didn’t have too much time to spend, but I was able to snag a beautiful hand-women poncho from one woman. You will most likely catch me wearing it on campus come winter term 🙂

Next, we took a ferry to Ometepe Island. Ometepe is an indigenous word which literally means “two hills” and, as you might guess, the island is marked by two large volcanoes. After we docked, we made a very bumpy trek to our home for the rest of the weekend at Finca de Venecias, a quaint little estate tucked away in the midst of the Nicaraguan jungle. We spent some time at the beach, had some very interesting dinner experiences, and just rested for the next day.

On Saturday, I experienced what was probably my favorite and most rewarding time throughout this entire study abroad experience. We journeyed to a local school to teach (who we thought would be) elementary school children some basic English phrases. We had divided into groups and each chose a different theme to teach the students. Our group (myself, another Drexel student and a student from Emory) chose to focus on parts of the body. We created a little stick figure (Juan el Guapo) and labeled some body parts and then decided to teach the kids the head-shoulders-knees-and-toes song! Well, once we arrived at the school, we discovered that actually the high school students have class on Saturdays (only on Saturdays in fact). So, after a quick mental adjustment, we went to work. It was a bit of a struggle getting the students on board with singing a silly song, but it worked out in the end!! We were laughing, the students were laughing, and by the time we were finished, they could sing the song by themselves! I felt pretty proud.

Then, we went with some of the students to their nearby baseball field. It wasn’t much, but they hadn’t had enough money the previous year to have a baseball team so obviously the field wasn’t in pristine condition either. Oh, ps- baseball is the national sport in Nicaragua, they LOVE it! About half of our group played baseball with the students and the other half played soccer with the others. Well, considering I have about zero athletic ability, a friend and I decided to bring our hula hoops to play with and some of the Nicaraguan girls LOVED them! I attempted to teach them some basic tricks, but I realized teaching hooping terms is Spanish is a bit more difficult than I had imagined. Still, I didn’t let the language barrier hold me back, and some of the girls picked up the basics really well! I was so happy, I couldn’t stop smiling. The image of their little faces lighting up when they mastered a trick will live on in my mind as one of my happiest memories of this study abroad experience.