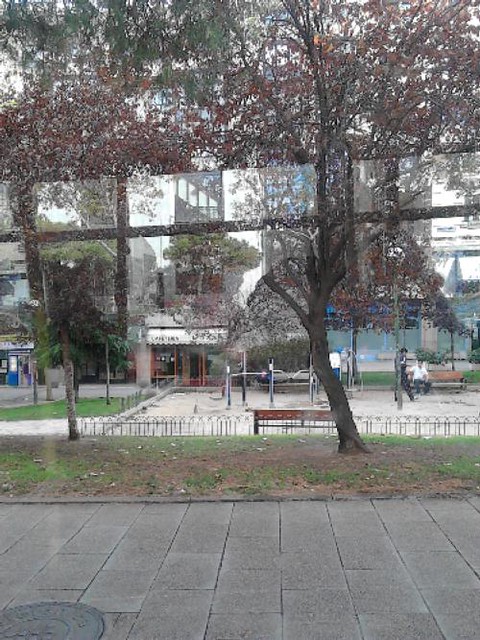 I have always opted to take the bus instead of the train to go places and to get home. The first time I took the bus, I thought the people on them were a lot nicer and calmer. The train is intolerably loud. It is not fun sitting in the middle of what seems to be a heated debate. Other times, the loudness is due to laughing or just being excited. Additionally, though the train is quicker, it is unbearably hot and unbelievably crowded. There has not been a time that I have been on the train when it was not full. I tried going at different hours, keeping in mind that the siesta starts at two in the afternoon. It always seems that Spaniards always have somewhere to go. This includes the young and the elderly.
I will not forget when I first arrived to Madrid in late August. The heat was insufferable. It definitely distracted me from the city’s beauty for the first week and a half. When I had to go places, I took the train because the stations were easy to navigate and I always got to where I needed to go in a timely manner despite how far I needed to go. I thought the trains would be air conditioned but they were not. It felt worse being inside the train than out of them. Since then, I have been paying attention to the different bus stops in my neighborhood. Some bus stops host four different buses. I found out that there are five buses in my neighborhood. Since I have memorized the five buses, whenever I go to another neighborhood, I make it my duty to pay attention to the buses that are in that neighborhood.
I still cannot believe that I have yet to master how the time is in Madrid. Today, I thought 15:30 was 2:30pm instead of 3:30pm. I saw that the time was 2:05pm. Thus, I had less than thirty minutes to arrive where I needed to go. I decided to take the train and not the bus. I got there in about 15 minutes. I decided to take the bus back home. The bus ride took me over an hour but I enjoyed it. Another advantage of taking the bus is being able to see more of Madrid. The picture for this blog post is one of the many parks that I saw while on the bus. Apparently, parks are very popular here. Not all resemble Central Park but it is clearly a place that is visited a lot. I live near a popular park, Retiro Park. I have yet to visit. Whenever I tell people that, I get a confused look. I now plan to visit a park before I leave.