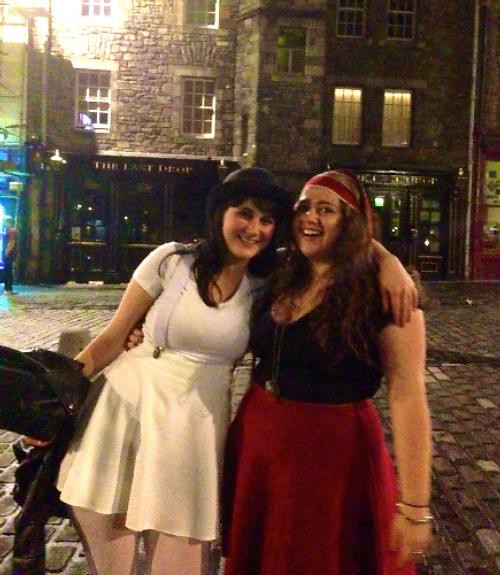 Edinburgh celebrated Samhain, the Celtic Halloween festival tonight. A fire festival was held on High Street, the street also known as the Royal mile. Dancers ran along the streets of Old City carrying lighted torches just as the Gaels did in Scottish history. The dancers preformed around the Royal Mile in a traditional Halloween manner, whatever that is supposed to mean. As a non-Gael I have no idea what kind of traditions Halloween invokes other than the ones I am used to, like dressing up or getting candy.
Halloween is my favorite holiday and a holiday that was created by the British. The Irish in particular are superstitious people and Jack-O-Lanterns are only one of the things that the Irish/British have passed on to us Americans. Many of our Halloween traditions can be traced back from “across the pond” as they say. The British invented trick or treating, but it is called guising here. I have no idea how that is spelled, but I gave it a shot, as I only heard of it just today. Samhain is what they call the festival surrounding this magnificent fall date. The ancient Gaels believed the dead rose during the night of October thirty first. That is why they dressed up as ghouls or ghosts. They needed to disguise themselves as one of the dead.
I was so delighted to see as many people dressed up as I did. While I knew the Samhain Fire Festival was a large attraction and Halloween was practically invented in Scotland, I was told that Halloween was not as popular in Scotland as in America.
They downplayed the holiday here more than I originally thought. The stores did not have as many decorations as the stores back home would have. So it surprised me to see the enthusiasm from the young people of Edinburgh tonight. I saw dozens of students and young adults dressed up as early as three in the afternoon. I saw lines stretching out to the street from Halloween costume stores. I was so happy to see the shared excitement for Halloween here.
Trick or treating, or guising, is not popular here like it is in The States. The streets of my home city would have been packed with children with pumpkin shaped buckets, but not in Edinburgh. It seems as if the nightlife is more important when dealing with this holiday. Only adults can take part in that. That could be the reason why so many children stayed in tonight while so many adults were out in their place. That’s why I had so much fun tonight during the Fire Festival.