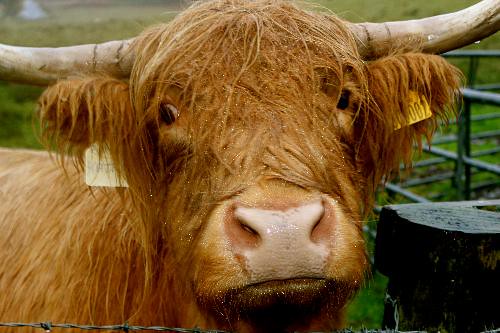 The Highlands of Scotland are said to be the less fertile land of the country, but they are beautiful country, filled with fascinating colors and plant life suitable for any painter’s next project. Contrasting greens and oranges and reds filled the landscape when I went to visit for a day. It was a foggy and rainy day, the typical weather for Scotland. I should not have been surprised by the kind of weather that day, but I was a little upset that my day trip to the Highlands was a damp one. Later on, however, I learned to appreciate it. The fog and low-lying clouds added to the scenery in a way. The cool gray color hung over the warm colored land and it all just felt right. It seemed as if the cold and meek weather was supposed to be there. It turned out to be the perfect day to explore the Highlands.
We departed from center city Edinburgh in a bright orange tour bus decorated to look like a hairy coo with horns and a tongue on the front bumper. A hairy coo is the kind of cow that many people picture when they imagine Scotland, which in fact is just a Highland cow. It’s an orange cow with long hair and horns originally from Scandanavian countries. I had way more fun seeing a Highland cow that day than I should have, but then again, so did everyone else on the tour. When our tour bus pulled up to the Highland cows a couple of hours after departing from the city, the cows were ready to pose for us. They must have known that we were going to feed them bread because they all walked up to the fence. They were stockier and lower to the ground than I would have expected. They were definitely an added treat to the tour.
The whole tour was not only focused on the cows thankfully. We saw some beautiful landscapes, memorials, and castles. The largest Wallace monument, paying homage to Scotland’s national hero was just before the highland and lowland separation line. It was a tall, pointy building adorned with statues of the hero. Inside, held his very own sword from the 14th century miraculously. Our tour bus then saw Stirling castle, which is not a working castle, but a great exhibit I hear. Unfortunately, we did not have the time to tour inside the castle, but I hear it is better than Edinburgh’s castle because it less like a museum, and more like a recreation of when it was working. Duone castle, the castle that makes multiple features in film and television, was my favorite place. Not because it’s where Monty Python filmed The Holy Grail or Game of Thrones was shot there or because the castle made an appearance in Outlander, but because it was the best playground I’ve ever been to. I had so much freedom and fun exploring that castle all to myself. The view from the top was amazing.
The Highlands are like nothing I have ever seen. I always thought that the countryside of Pennsylvania or Massachusetts was great, but that part of the world isn’t even comparable to the Highlands.