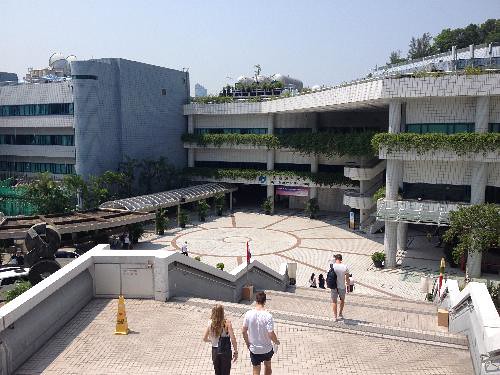 I’m writing this first blog post in my dorm room, with a mug of tea by my side and a jar of peanut butter between me and my laptop. I’m currently stress eating peanut butter directly from the jar (try it, it helps) because I have yet to finish two Drexel classes.

Today is Tuesday, September 1st, 2015. I arrived here in Hong Kong last Monday, August 24th. The 24th was the first day of orientation week at the City University of Hong Kong, which would have been great if I could have finished all of my Drexel classes by then. I actually had to leave Drexel’s summer term early — the 24th was the first day of week 10. Right now is finals week at Drexel. I actually finished three out of my five classes (one was accelerated, so it only lasted weeks 1-5, and I took two finals early). One of my remaining classes is online, and I finished the major part of the final project this morning. However, for my other class… I don’t even know when the final is because the professor doesn’t even know. Ugh. (Thus, stress-eating.)

Anyway, I’ve spent a lot of time stress-not-studying this week. I just want to get the final over with so I can focus on things here in Hong Kong. Classes just started — I’ve heard generally good reviews from the other exchange students I’m friends with — but I actually haven’t had a single class yet! My first class of the week is tomorrow (Wednesday) at 5 PM. Something that makes the week even better is that we have this Thursday off. According to a sign posted on the Student Residence Office, the 3rd of September is the 70th anniversary day of the “victory of the Chinese people’s war of resistance against Japanese aggression,” so that’s why we have a holiday.

Because I just got here, I’m still getting used to the campus (the academic buildings are ridiculously confusing). The dorms are pretty nice, though, compared to Chinese dorms. My last co-op I was in Shanghai, China, and I got to get a peek at the dorms (luckily, I did not stay in the student dorms), which were less than ideal. There were 6 people crammed into one room which was approximately the size of my room here. Showering facilities were in another building, which meant, yes, in the winter, you had to run to another building to bathe. I was initially nervous to find out living conditions were here in Hong Kong.

There are 11 residential halls here at CityU. I’m living in hall 5. The rooms are essentially suites; you have two people to a room and one full bathroom between two rooms (literally — you can access the adjacent bedroom via the connecting bathroom). There is a common area on each floor which is a living room and a kitchen mixed together.

What is different about the dorm is that people do not get wifi in their rooms, which was devastating to find out. You have to bring your own ethernet cable, which is crazy. Luckily, there is wifi like basically everywhere else on campus.

Another thing that is different is the fact that people have to pay for air conditioning in their dorm room. The other day it was 86 degrees with 70% humidity. According to my weather app, it was supposed to feel like 95 degrees (it certainly did). So yes, it is very hot here in Hong Kong. This was done in an effort to heighten awareness of our impact on the environment, I think. It certainly has for me, at least. At night I would consider leaving the windows open to let some of the (possibly cool) night air in rather than turn the AC on… Though honestly, I’m a really frugal person. The AC actually isn’t that expensive (10 HKD [not even $2 USD] could probably last you two days if you only turned it on when you absolutely needed to), but since I have a higher tolerance for heat, I was fine keeping it off most of the time. Right now we’re entering the fall season, which I’ve read was probably one of the nicer times of the year to be in Hong Kong due to the low humidity and cooler weather.