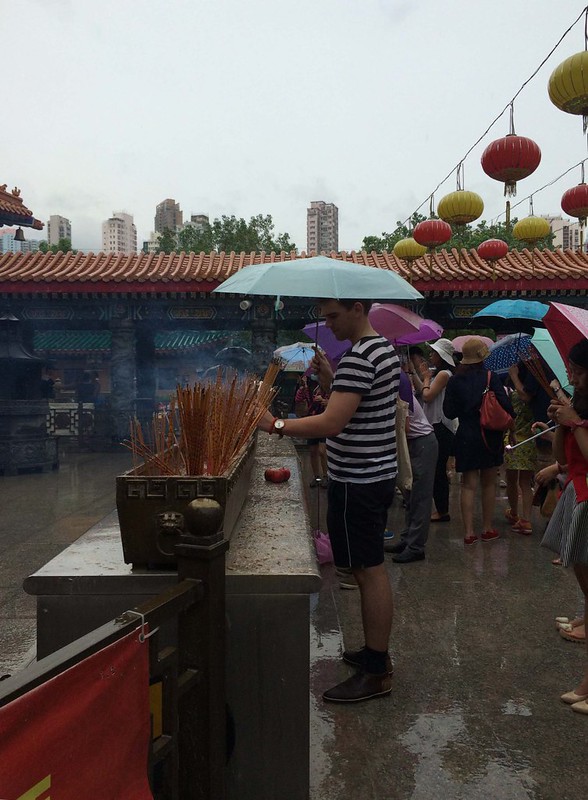 One of the tips that Drexel’s study abroad office gave us at the pre-departure orientation was to go on excursions hosted by the university since they would usually be cheaper than going to all of the attractions separately. I actually went on a CityU-hosted trip that cost $175 Hong Kong Dollars, or about $23 US dollars. The itinerary included visits to the Wong Tai Sin Temple, Victoria Peak, and the Sky 100 observation deck.

We set out around 10:00 AM to go to the temple first. The temple is famous for apparently making every wish come true. There were so many people there even though it was raining. Our tour guide, May, mentioned that a lot of the tourists are from Mainland China. I’ve noticed that a lot of people look down on the Mainland Chinese here, or talk about the Chinese in a generally negative tone. It’s understandable, though, what with the political situation, and the general impression that Chinese tourists leave on the countries they visit.

To make a wish at the temple, people had to buy incense sticks, light them, and place them in front of the main building of the temple. There were some students that came along that didn’t bring an umbrella, so I offered to share my umbrella with a Dutch student named Syb. We ended up buying a ton of incense sticks (enough so that both of us got 18 sticks each, haha) but when we went inside the temple, we discovered they were giving them out for free, so we got some of those, as well. Each person ended up lighting 27 incense sticks. I don’t think that’s supposed to happen, but at least our wishes definitely have to come true now.
There was a man who was collecting the incense sticks where people placed them. He worked at the temple, of course, but Syb noted that he would sometimes collect the incense right after the visitors would put them in the incense holder. (I joked that the worker must be really good at granting wishes, and granting them quickly, too.)

I asked Syb what he wished for — and he said longevity and also a lasting relationship with his girlfriend, which was very sweet. He then asked me what I wished for, and I said “to find out what I want to do in life.” Honestly, as of right now, I have no idea what I want to do with my biology degree (or rather, future biology degree). I mentioned that I had thought of wishing for happiness, but I figured I could achieve that on my own, and I shouldn’t rely on a temple to “grant my wish.” I also told Syb that I thought of wishing for money, to which he replied, “You shouldn’t wish for money.” I later asked him why he said that, and he said in return that people should work for money, not just expect it to come to them. People who win the lottery have a lot of money, yes, but after a while, the money would run out. What would they do then?

I really liked what he said — it showed that he has a very strong sense of independence and morals and is hardworking.

I don’t truly believe that the Wong Tai Sin Temple can grant people’s wishes. I really don’t. But going around the temple, buying incense, lighting it, and making a wish were touristy things that I wanted to say I was able to do. I was able to get a life lesson out of this trip, too.