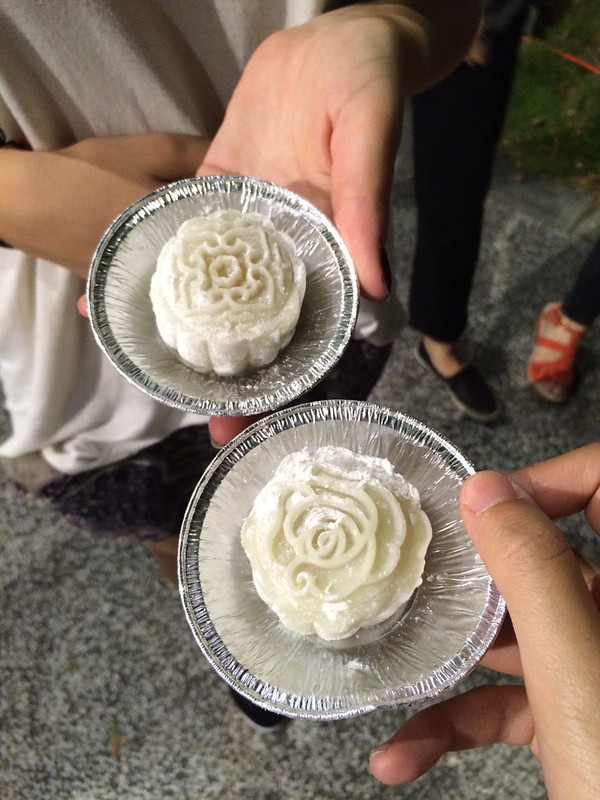 On Thursday September 24, the CityU dorms had a Mid-Autumn Festival celebration. I went not expecting so much, but it was so amazing! What I love about the Hong Kong university life is that everyone is so passionate and very involved with activities. I hope you guys can get a sample of their energy (and the local culture!) from this blog post.

I went with my roommate Susam, a creative media major international student from Germany. We went to the first station they had set up, which we learned was a “make-your-own-moon-cake” table. The students had dough already portioned out — we could choose between regular-flavored dough and green tea-flavored dough (I chose the latter of course) and a filling to be put inside, either red bean paste or green bean paste. Initially I thought we were supposed to wrap the dough around the filling ourselves, but the people running the table did it for us, which was much more efficient. They put the ball into a moon make hand-press mold, which they let us press, and out came a moon cake! It wasn’t like the traditional moon cake I’ve had before but was instead more like mochi. There was a nice, light green tea flavor to it. The moon cakes that we “made” are shown in the photo.

There were multiple tables outside of the multifunctional hall (which is equivalent to Drexel dorms’ multipurpose rooms, but the hall was its own separate building). There was a table for henna, which was great (may I say that everything was free of charge? What could get better than this?) , as well as a calligraphy table, where you could try your best at Chinese calligraphy. There were several make-a-wish stations, where you would write a wish down on a post-it and stick it on a board they had. This reminded me of Tanabata, a Japanese festival. About two years ago I celebrated Tanabata at Shofuso, a Japanese house and garden located in Philly’s Fairmount Park. My family members and I wrote wishes on nice, sturdy pieces of paper and then tied the paper to a bamboo tree.

CityU had set up tons of game tables. One such table gave you three darts to throw at a bullseye. You would get a certain amount of points for each ring, and at the end you could choose a prize according to how many points you got in total. Many prizes were small, like stamps or cute buttons (I scored low but managed to get a Rilakkuma button). There were bigger prizes, too, like coin purses or mini teddy bears (Susam was amazing so she got one of those). Right next to the darts/bullseye table was a “casino” table; you would throw dice and depending on what you got, you could double your prize or lose it altogether.

Several tables had chopstick-centered games. One such table had people use chopsticks to move a ping-pong ball to four different upside-down cups, all a distance apart from each other — I thought I could do this but I couldn’t. (My chopstick-using game is weak.) However, I fared better at another chopstick game. There were about 30 marbles in a water-filled cup and we were supposed to move the marbles into another cup about two inches away in two minutes or less. I was so, so close — I had only 3 marbles left when the time ran out! 😦

The Moon Festival celebration at CityU had nothing I’d never seen or eaten before, but the experience was new. I never would have imagined such a grand celebration of this holiday put on and run by students. I’m so thankful I actually went that night. I really wish Drexel had more passion devoted to things like this (and more school spirit in general), but now that I think about it, it seems that there aren’t very many holidays that can be celebrated by a huge student population at Drexel. Sure, we have events like Activities Unlimited, the Crystal Ball, and Spring Jam, but those events have a totally different vibe from the CityU Moon Festival. I guess the culture differences really have a big impact, more than I initially thought.