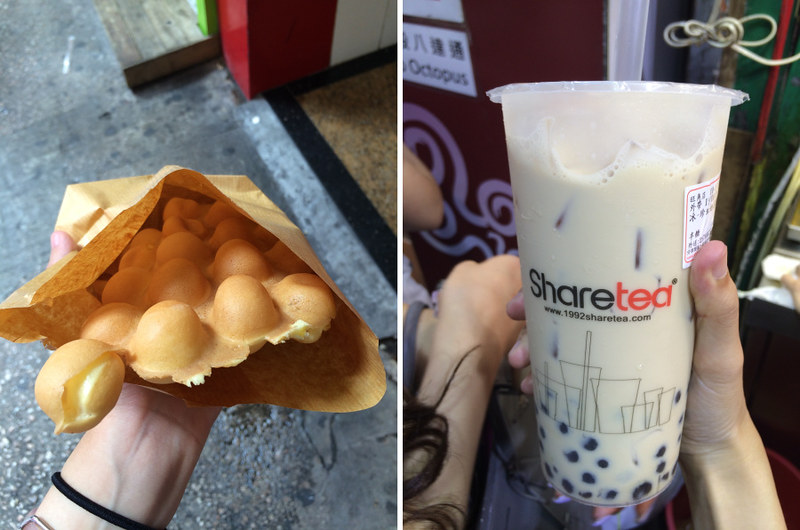 Just last week I had the opportunity to try a famous type of street food in Hong Kong called gai daan jai, or in English, egg waffle. Gai daan jai literally translates to “chicken egg small,” which makes total sense because the waffles look like lots of chicken eggs stuck together. Gai daan jai is a light, slightly sweet pastry that you can eat on the go. It’s served warm and is a bit crispy on the outside and soft on the inside.

So you may be wondering what street food is. You know how food is a great thing, and it’s even better if it’s delicious and inexpensive? Street food is exactly that. The food is made fresh and very quickly, and it’s usually packaged so that people take it on the go (you have to because street food vendors don’t have places for you to sit down). Street food vendors can have a tiny tiny shop (basically just a storefront, you can’t go inside) or their own cart that they wheel around.

Hong Kong has a ton of amazing street food, and I actually hadn’t gotten to try gai daan jai until about a month after I came here, which was a shock to a few of my friends. However, I did get to try other street food, and I have seen ones that I have to eat one day.

I’ve tried curry fish balls, which sounds kind of gross but was actually one of the best things I’ve had so far here. These are spherical balls of fish meat stuck on a skewer and cooked in a curry sauce. So. Good. The cheapest I found was $6 HKD for 6 fish balls — less than $1 USD. It’s super worth it.

There is also street barbeque. You can pick what you want and they grill it for you right there. Popular things are squid, eggplant, beef, mushrooms — basically everything and anything you can grill. I haven’t tried it here yet (though the squid is so, so tempting) but I have tried it in Shanghai and it was soooo incredibly good.

Something they also have from Shanghai is stinky tofu, which, as you can guess, smells really really bad. At least, it does to me and other people who haven’t grown up with it. It’s interesting because I love the smell of durian (sometimes), a fruit that is famous for its fragrance (or odor). I grew up with durian, so I think it smells and tastes great. But people who aren’t used to it disagree. The smell of stinky tofu comes from how its fermented, and I can only describe said smell as “a really thick fart.” (Is this appropriate to say on this blog?) Other people would say the same for durian, too. Anyway.

Last but not least: pearl tea AKA bubble tea AKA the best thing on Earth. You will find lots of drink places that offer a ton of different drinks, but I like ordering pearl tea to serve as my control over different drink shops. Pearl tea is a popular drink in Asia that features tapioca balls in milk tea. The tapioca balls look like pearls and bubbles so they are named as such. It’s a perfect treat for a hot day… And warm day, too. What I love about these stores is that you can adjust the amount of ice and sugar that is put in. My usual order is pearl tea with half sugar since I don’t like really sweet things. If the weather is only a little warm then I order it with half the amount of ice. In cold weather, you can order the pearl tea hot. It was a bit strange to me at first since I was accustomed to having it cold, but I grew to love it too.

It’s great because there are more tea places popping up in Philly’s Chinatown that echo the style of tea places here. TeaDo, TeaTalk, and Kung Fu Tea are the prime examples off the top of my head. I haven’t found a completely acceptable pearl tea in Philly since I came back from Shanghai, which is strange because my taste buds are not sensitive at all, so I didn’t expect to notice a difference. I guess pearl tea in the US and in Asia really aren’t the same. (Okay, well, the only milk tea I thought was comparable was from TeaDo.) I really recommend you try pearl tea in Asia because your life will literally be changed.