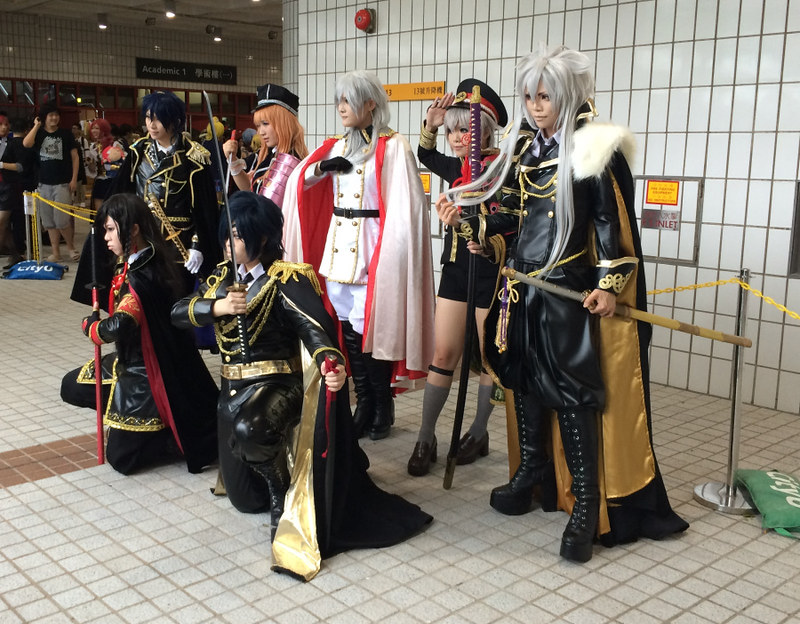 I like to call this day “the day I tried to study but accidentally went to an anime convention instead” — I was heading from the dorm to the library to study when I spotted a cosplayer.

Let me back up a bit. Anime is Japanese animation (think Sailor Moon or Dragon Ball Z) and there is a whole culture associated with it. At anime conventions, many people dress up as characters from manga (Japanese comics/graphic novels), anime, comic books, TV shows, and the like. This is called cosplay, a mashup of the words “costume” and “play.” The cosplay can be incredible to see; hours and hours of time are spent putting these costumes together, and usually the cosplayer’s efforts are recognized when people ask to take photos of them at the conventions and if/when they win cosplaying competitions.

I’d only been to one convention before this one, and there was so much to do. There are movie and show screenings, costume competitions, panels, games to play (board, card, and video), workshops, and more. My favorite parts are seeing the cosplayers and the artist alley. At the artist alley, people can buy artwork that people make. These things are usually fanart of shows and anime. Don’t underestimate the word “fanart,” though. Some works are mindboggling-ly (?) good. Poster prices can range depending on the artist and size of the poster, but from what I remember, a good-sized one was about $15 USD back home. There are also lots of other things for sale too, such as keychains (of your favorite characters, of course), buttons/pins, stickers –so much!

So back to my story. I was heading to the library on Sunday when I spotted a cosplayer, which I thought was great but bizarre (who dresses up on a regular Sunday?). As I got closer and closer to academic building one, which houses the library, I saw more and more cosplayers. And also many non-cosplayers, taking photos of the cosplayers. That’s when I realized that there was an anime convention at the school, which was ridiculously crazy. Entrance into the gym, where lots of people were going into, was $12 HKD, but since I was a student of the university, I got in for free, which was awesome (entrance to the con I went to was like $25 USD for one day, I think).

Side note: the convention being held at the school explained the He-Man I saw smoking a cigarette near the subway entrance Saturday night. I was out all day and was extremely puzzled to see He-Man. Smoking a cigarette.

Anyway, the venue that I went into free of charge was actually the artist alley. It was small compared to the con I had gone to before but I loved it nonetheless. There were many talented artists there; I was just sad that I didn’t recognize a lot of the characters. It was still a lot of fun, though. I wish I could post so many more photos and show off all the amazing cosplays.

The culture differences — and similarities — are so strange. This convention at CityU was small, yet there were so many people with amazing costumes. There were lots of passionate fans too; I passed a group of 5 guys adorned with merchandise from one certain series. In addition to headbands, they had t-shirts, scarves, fans, belts with a ton of buttons on it, and banners worn as capes — all with the characters on it. It was ridiculous yet amazing. I asked to take a photo and told them, “You guys have so much merchandise. It’s incredible,” to which they replied, “this is nothing compared to the Japanese fans,” which was hard to believe.

I think what I stumbled upon helps represent the passion and energy that I’ve noticed in the students here. Many students at CityU are enthusiastic and go all out for things like sports competitions, club activities, orientation camps. And even though the convention was only over a weekend, people spent their time dressing up and getting their props together and everything. They weren’t even paid; this was something that they liked to do. This energy is something that I’m going to miss back home.