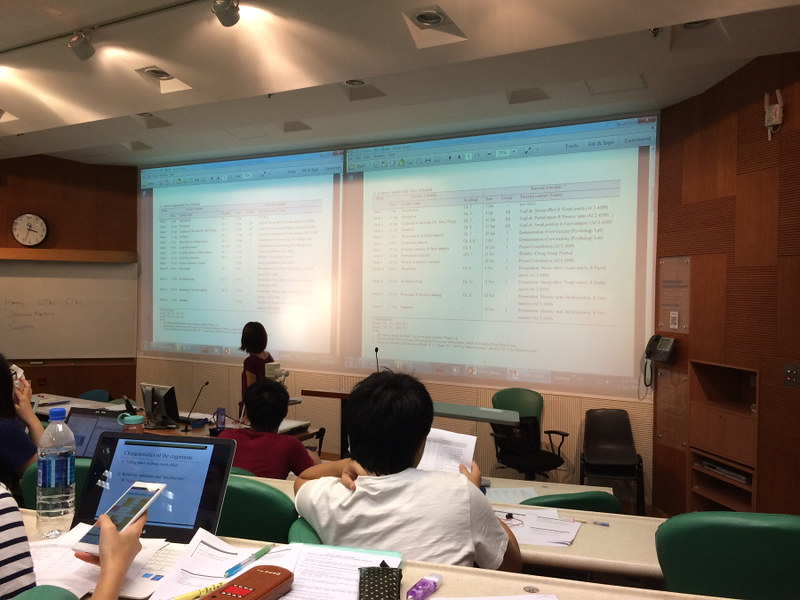 I realized I haven’t started talking about classes yet. I’m taking five classes this term, three of which are psychology, the remaining two biology. However, I only have 3 different professors right now since some of them teach two classes that I’m taking. The first week, some classes were cancelled, so I only had my personality psych and cognitive psych courses. Classes here are interesting, to say the least. I didn’t realize there would be huge differences between Drexel and CityU classes, but there are; this blog post will be a bit choppy because it will simply sum up my thoughts…

Don’t bother going to class more than 10 minutes early. The lecture halls are packed back-to-back, so you can’t go into the classroom because there would be a class in session immediately before yours.

Here at CityU, you have lectures, tutorials (the equivalent to recitation), and labs. I don’t have any labs, and tutorials are 50 minutes, very much like how Drexel works. The lectures, however, are so long! While at Drexel, lectures were maybe 1.5 to 2 hours max, while all of my lectures at CityU are at least 2 hours long. My biological psych class is 3 hours long and it’s extremely painful to sit through. What I like here, though, is that the professors give us a 5-10 minute break every hour.

There is something similar to Blackboard, too. It’s called Canvas and it has the same functionality as BB Learn (contains course materials). It’s scary because the final exams here are worth about half of the overall grade. I’m just glad that my classes are pass/fail because I’m a horrible exam-taker.

All the classes here are taught in English, but the professors (that I have, at least) have an accent when they speak. It isn’t affecting my learning too much, but I find that I have to concentrate harder to understand what my professors say.

What I find really, really annoying is that students talk in class. They’re kind of loud, but I don’t know if they realize it. The professors don’t usually stop their lectures to address them, though. I’m going to admit that sometimes, I turn to look at them with a disapproving eye to inspire them to stop, but it doesn’t usually work. I would say something out loud, but I feel that it’s not in my place because I’m an outsider. Talking in class may be the norm in Hong Kong, for all I know. Also, many students come in late, but they are loud about it! It’s really irritating. Instead of closing the door to the lecture hall quietly, they let the door slam.

We have group projects and presentations in every class that I’m taking. I’ve found that the professors leave a lot up to the students. Let’s take my microbiology class as an example. We have a lot of freedom and are allowed to choose just about any topic to present on. However, the professor has her own guidelines (clean format, references stated, applications and uses of the findings, conclusions) that she does not specify, and after presentations, she gives feedback to the presenting group. I have a love-hate relationship with this format. It’s annoying because the students are criticized when they weren’t given a strict set of things to include. On the other hand, it allows students to learn how to prioritize information and figure out what is relevant and what is not and also helps develop a sense of independence.