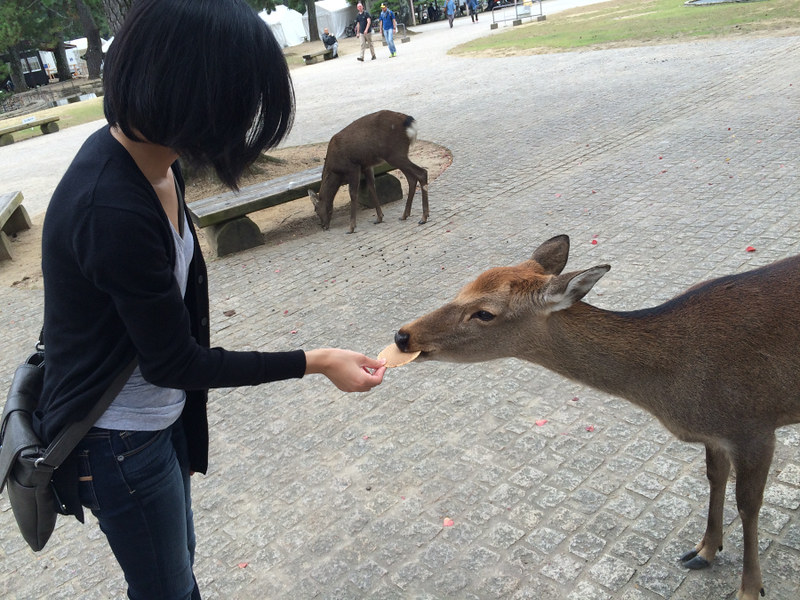 Part 3 of 4 of my Japan adventure. Honestly, this is the only thing I can talk about right now because the two-ish weeks that have passed since my Japan trip have just been me in Hong Kong being super anxious about being 10 weeks behind my study schedule and angry that my favorite figure skaters Volosozhar and Trankov (who slayed at the pairs competition in Sochi 2014) were, until like yesterday, in PHILLY. And I wasn’t THERE. Very upset indeed.

Anyway, on Saturday, Oct 17, Alix and I woke up early and checked out of our hotel around 6 AM to catch the bullet train, or shinkansen, from Tokyo to Kyoto. The bullet train traveled the 320-mile distance in 2 hours and 18 minutes. It would have taken about 6 hours by car. Talk about fast, huh? The trains leave about every 10 minutes so there no worries about missing a train and being horribly late. You have a greater chance of getting a good seat, too, since the trains are so frequent; the train goes past Mt. Fuji, which we actually did not get to see that day since the weather was kind of bad. However, once we got near Kyoto, the weather turned gorgeous.

We met Alix’s friend Kana at Kyoto Station, and we all took another train to Nara, yet another city, where we met Kana’s friend Sayaka, who brought us around Nara. We first had lunch then went to the Kofukuji Temple, which is close to Nara Park. Nara Park is famous for all the deer roaming its grounds. We all bought shika senbei to feed the deer, some of which were kind of aggressive. It was really fun to get up close to a deer, though! After playing around with the deer we went to Todaiji Temple, which houses the world’s largest bronze statue of the Buddha. It was ginormous. I can’t think of any other way to say it. The statue was huge and so incredibly beautiful, and I was moved to tears because of its beauty, which is strange because I don’t usually get emotional over religious art.
The four of us soon bid goodbye to Nara and headed for Osaka, famous (to me) for its food, dialect, and baseball team. The city was bustling with activity and definitely had a different pace from Nara, which was slower and more quiet and calm. We patiently stood in line for takoyaki, a cooked flour ball with octopus inside. The takoyaki are cooked in a special pan and topped with takoyaki sauce, mayonnaise, green seaweed, and bonito flakes. I had had takoyaki before in Shanghai, but the Osaka takoyaki was so much better. It could have been because they were authentic, or maybe my taste in food has changed since then.

We then went for yakisoba and kushikatsu at a teppanyaki restaurant, where we had a hot grill at our table (think Hibachi or something). The most important thing we ate there, though, was okonomiyaki, a pancake with just about everything good inside. It was one of the best things I ate in Japan, which is saying a lot because I had a lot of gooooood food there. We ordered the Special Yaki, which has inside beef, shrimp, pork, scallops, squid, konjac, and fish sausage. So incredibly good. None of the pictures I took of it looked good because it’s a huge mess — a pancake with soo much inside. But that’s okay because the taste more than made up for it. Besides, the best-tasting foods are the ones that look like a mess on your plate… Right?