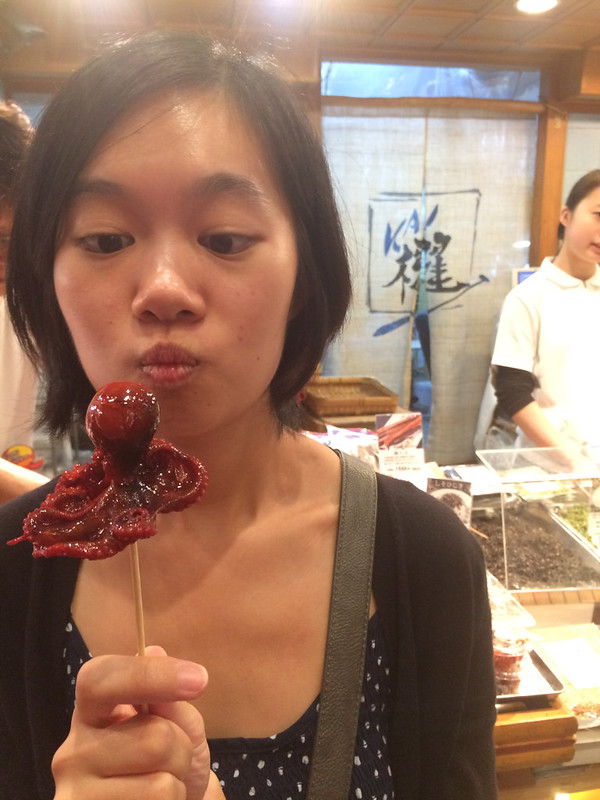 Last (!) Japan blog post. We stayed over Kana’s house that night, which was in Kyoto, and headed out around 9:15 AM Sunday. Her family was very hospitable and very kind, traits that I’ve observed in every person I met in Japan. Her father dropped us off at Arashiyama, a place on the outskirts of Tokyo known for its scenic beauty. We met two other Japanese students who had studied at Alix’s home university, Mami and Mayu.

Kyoto is apparently known for its matcha, or green tea, and that was apparent everywhere — there were many stores selling green tea ice cream (it was a miracle that I didn’t get any) and a few selling biscuits with matcha flavor. There was one store we went to that sold dango, a sticky sweet pastry very similar to mochi, but more sticky and gooey. I had heard about dango served with a sweet soy sauce and got the chance to try it, but, er, it wasn’t really to my taste. Near the restaurant is the entrance to the Path of Bamboo, which, as you may have guessed, is a path winding through a bamboo forest.

Let me take a moment right here to mention the environment in Kyoto. The air was so fresh and clean thanks to all of the trees and other plants in the area. Everything was clean because, well, Japan is a very clean country. That trip to Japan was a wonderful opportunity to clear my mind and relax. The bamboo path had quite a few people, though, apparently more than normal because there was a ceremony going on that day, but the less crowded parts were wonderful. I’m really very sad that we had to rush from place to place and not fully appreciate the beauty of Japan (Alix and I went to 4 cities in 3 days).

Afterward, we went to Kinkakuji, the Golden Pavilion. The outside of the building is covered with pure gold leaf, so the “Golden” in its name is not from the color of the paint or anything. It’s actual gold. The Pavilion was actually burned down decades ago by an insane monk, who, from some of my sources, went crazy because of the beauty of the building. We were so, so, so incredibly lucky that day since the weather was gorgeous. The blue skies were clear of all clouds and that provided a beautiful backdrop for photos, and one could clearly see the building.

The park that the building was located in was huge and scenic and really helped me appreciate nature. It was a nice change from the urban rush that Philly, Hong Kong, and Tokyo have. We took the time to stop at a traditional tea house and have green tea along with a dessert, like something you would see at a traditional tea ceremony. There was a certain way of handling the teacup and I was really glad I had people who were really familiar with the culture to guide me. When the teamaster served the green tea, the cup is presented in a certain way. Teacups have front side and back side. The cups are presented to us with the front facing us, and we should not pick it up and drink directly from the front side. We were supposed to pick the cup up, hold it in our left hand, and rotate it twice, in 90-degree increments, with our right hand; we are not supposed to dirty the teacup “face” with our mouth, so we should drink from the back side of the cup, with the front side facing away from us.

Our last stop was Nishiki Market, known as the Kitchen of Kyoto. There were more shops nearby which sold clothes, hats, handkerchiefs — I could seriously spend a day here. There were so many different foods, all looking incredibly fresh — fruit, hazelnuts, bonito flakes, seafood — and food you can buy there and eat, too. There were chilled cucumbers for sale and also those drinks with a straw directly in a coconut (except instead of a coconut it was a grapefruit) and tako tamago! It is a very small octopus with a quail egg inside its head (pictured). I felt a little bad eating it because it was so cute, but it was delicious, and I forgot about my worries soon after.

We ended our trip soon after that. I have to end this post here because character limits…..