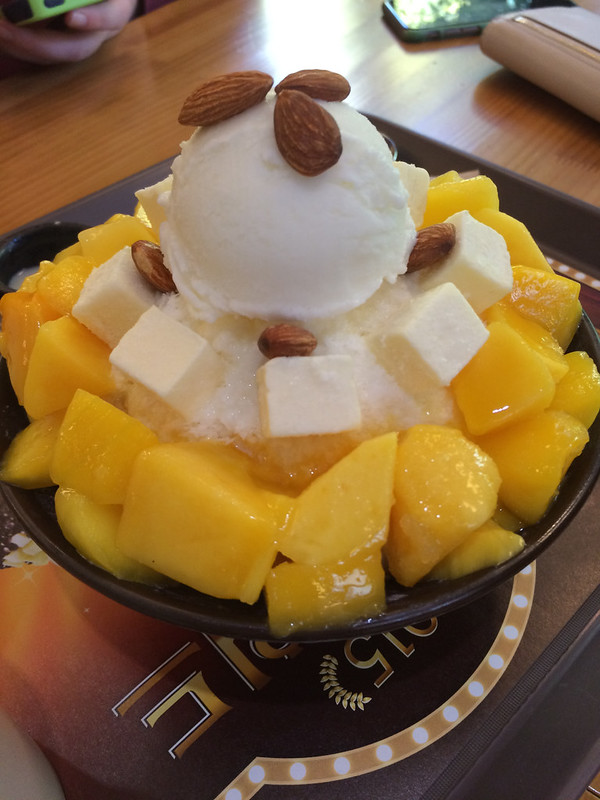 We set out relatively late the next day; we slept in since we were so tired. The three of us went to a galbi restaurant, another type of Korean BBQ, but more focused on beef instead of pork. It was amazing, of course, but the most notable thing to me was the dessert served at the end. The dessert wasn’t something like ice cream or cake, but instead a generous piece of cantaloupe and shikhye. Fruit, I feel, is a common dessert in all Asian cuisines that I’m familiar with. I personally prefer “Asian” dessert, too — American desserts are just too sweet! The fruit that they serve for dessert is naturally sweet and not so much another burden on your stomach as something like cake is. Shikhye is a Korean rice drink, which was one of the most amazing things I had there. It’s usually served as a dessert and I really hope that I can find it in H-Mart or something back in Philly, or learn how to make it by myself or something.

That’s not to say that Asia doesn’t have its desserts, though. We went for snow ice after lunch. Snow ice is not the same thing as snow cones. Snow cones are the dessert you buy as a child and are disappointed with because you eat all of the flavoring and then you are stuck with a giant ice ball. Like why? Snow ice is so much better and not disappointing — the ice is shaved so it really is like snow, really fluffy and light. The toppings vary, but Winnie recommended the “mango and cheese ice” so we got that. You may be wondering, “what? Cheese?” That was my reaction too, but Winnie told me that when they say “cheese,” they mean cheesecake, not cheddar, American, or gouda. The snow ice we got was amazing — toppings included generous chunks of fresh mango, bite-sized cubes of cheesecake, a scoop of cheesecake ice cream, almonds, and condensed milk, which we were supposed to pour on once we ate most of the toppings and was left with the snow. My question is why doesn’t Philly have a dessert restaurant like this? I bet that it would be a big hit if a snow ice store opened in Chinatown. Those of you who haven’t tried snow ice are missing OUT.
After, we went to Hongdae, an area near Hongik University. From what I learned in Korea, places around universities are the best places to shop because things are relatively cheap yet good. Plus the atmosphere is really nice. Hongdae was a more trendy place, with more people than normal because of Halloween. There were lots of street performers, dancing, singing, or doing magic. I think we even passed a rap-off, but it wasn’t too impressive.

Dongdaemun Design Plaza (DDP) was the next stop, known for its unique architectural design and its status as a fashion and design hub in Korea. The outside of the building was beautiful and decorated with lights — think the lights on the Cira Center in Philly or the World Expo Axis in Shanghai. My favorite part of the DDP was the field of LED roses. We went at night and it was an amazing sight — the each rose is equipped with a light and lit up the area near the DDP. That night, there was a craft fair going on, too, so it was very lively. There was a busker (or street performer) who was singing and playing guitar, too — I think they had an event or something because he had his own mini stage and there was a sign next to him that advertised a busking performance.

The tastes and sights that I came across in Korea were indescribable. They’re really something you have to experience for yourself. I can only hope that my blog posts inspire people to travel the world.