One thing I mentioned in my last blog post is that I loved Singapore because it was a modern city yet also very proud and protective of nature. I mean, there are more than just a few trees and planted flowers and bushes around. Singapore is actually a little bit less than twice the size of Philadelphia and has a ton more people — in 2013 there were about 5.4 million in Singapore compared to Philly’s 1.5 million. I guess that much space to spare goes toward residential places and parks. Singapore has a zoo, which Alix and I didn’t bother to visit, and a nighttime safari, which we also didn’t bother to visit. But while planning our short-lived time in Singapore, we went to two huge places: one, the Jurang Bird Park, and two, Gardens by the Bay.

The bird park was situated quite a while away from the city center but wasn’t difficult to get to. There were quite a few different attractions to see which were within walking distance of each other. There was so much vegetation, which helped explain the clean (but still humid) air throughout Singapore. The copious amount of trees and other plants, however, were home to many bugs. We were advised to wear insect repellent to keep the mosquitoes away. The birds weren’t simply kept in small cages but huge aviaries, with birds from all over the world. One of the most beautiful things to see there is the African Waterfall Aviary, which was about 100 feet tall and featured a huge, man-make waterfall. I didn’t see any birds when I visited, unfortunately, since there was a small thunderstorm with light rain going on at that time.

Before I visited the waterfall, though, I paid a visit to the Lory Loft, a 9-story high aviary for lories and lorrikeets. The birds were free to fly around, and visitors were allowed to buy food to feed the birds. Of course, since I loved birds, I HAD to do this. So far this year, I fed giraffes and deer. I got to add birds to my list, too. And it’s not like everyday people feed birds at a close range. Plus, I really loved birds. 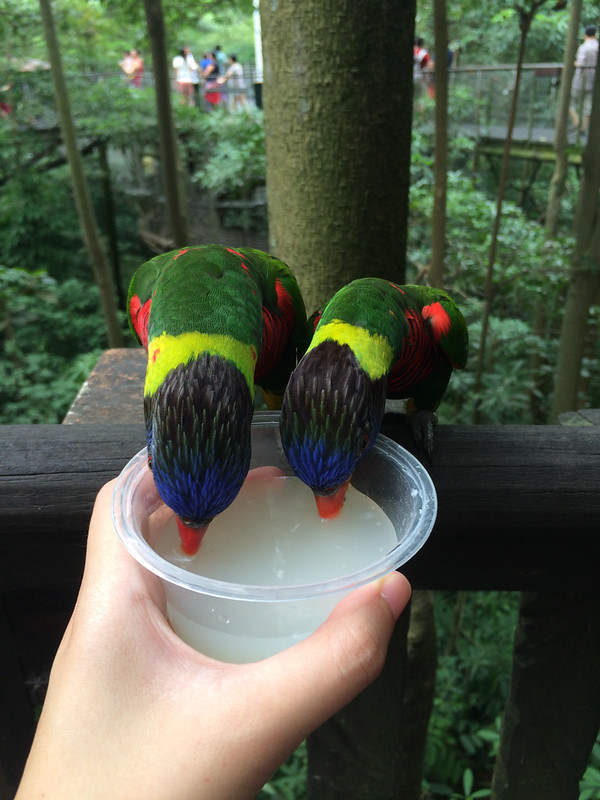 The lories were so colorful and very loud. Some were also pretty aggressive. I had a lory that seemed to really, really liked me and just hung out on my shirt, purse, and camera for a while. (It seriously wouldn’t leave and I was starting to wonder how I could bring a bird back home.) Many lories, though, were content with just sitting on the rail and drinking from the cup of lory food. Quite a few people were good at handling the birds, but there were others who were very skittish and afraid of them — mostly children who were afraid to get close to the birds, or, when the birds perched on their hand, the child would freak out and drop the cup of lory nectar, scaring the bird away. Poor birds. 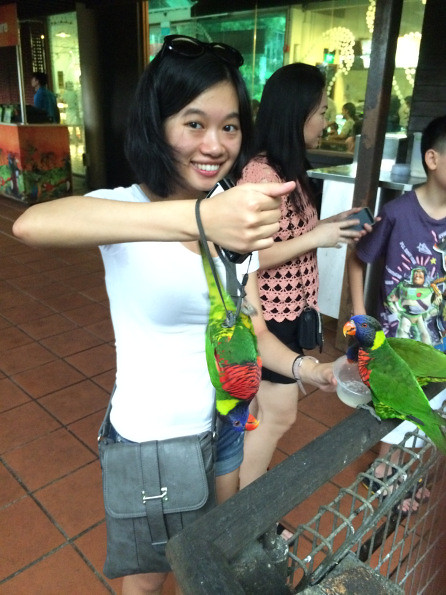 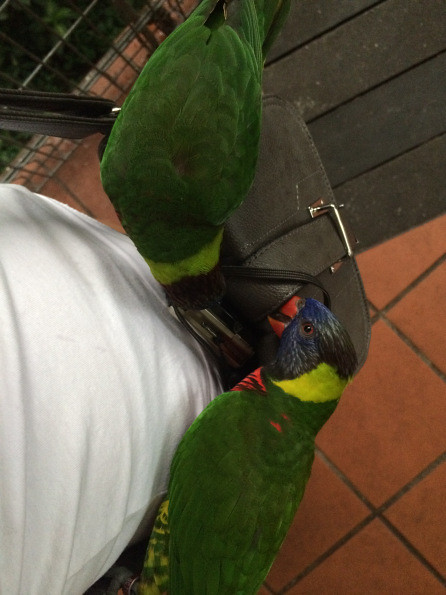 Some lories were more friendly and touchy than others. I had one who perched on my hand, not the rail, and another one who licked my hand? The aggressive lory that I mentioned before actually sat on my shoulder and chattered at me before moving down to my shirt and bag. I managed to get a selfie, hehe. 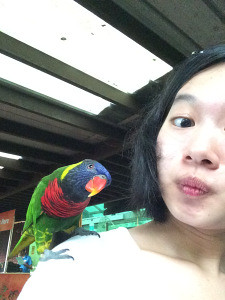 As night fell, Alix and I made our way down to the city center. One thing that was recommended by all of our friends to see in Singapore is Gardens By the Bay, a huge park, as you can guess. The park featured a bunch of nature-based attractions, like different-styled gardens (Malay, Chinese, Indian; so intercultural!), giant hedges shaped like animals, and more. There were two indoor attractions called the Flower Dome and the Cloud Forest, but those cost money to get in, and we could kind of see inside through the glass anyway, so Alix and I were okay with not going in. The main attraction, though, was the Supertree Grove, which contained 12 of the 18 Supertrees. These trees are man-made but are beautiful at night, especially since they light up. 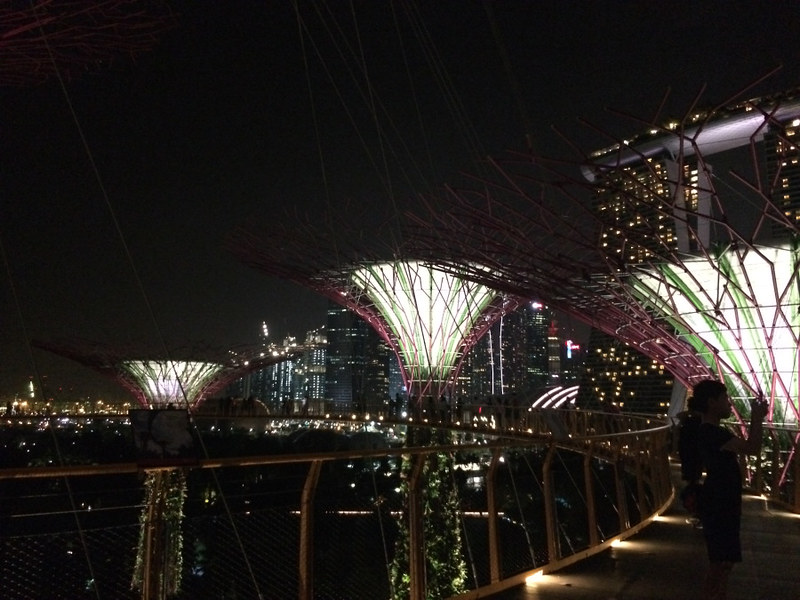 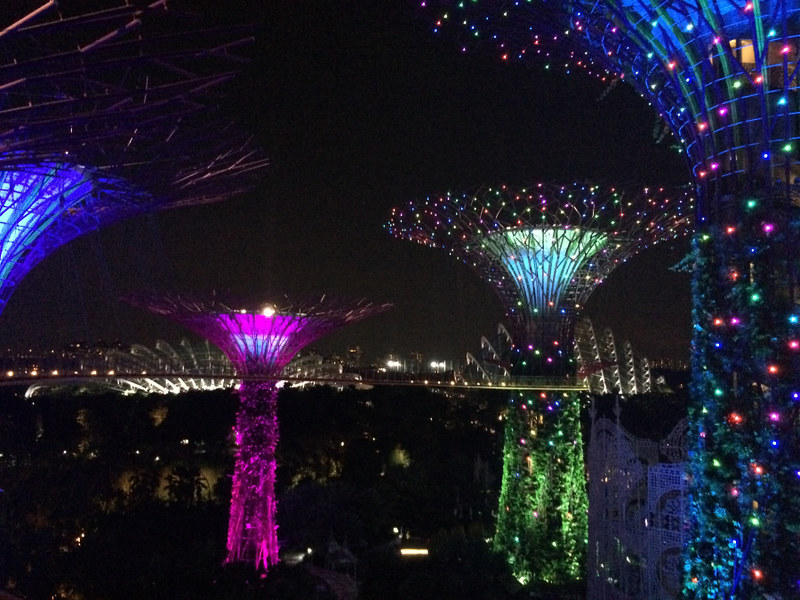 There is a skywalk connecting about two or three different trees, and Alix and I managed to be one of the last groups to go up before the Skywalk closed for the day. It was timed perfectly, though, since the Christmas light show started soon after we got to the top. Only a few countries in the world celebrate Thanksgiving; in Korea and Singapore, Thanksgiving practically doesn’t exist. I remember walking around Seoul on November 1st and seeing Christmas decorations already up. Even in Festival Walk right now is a gigantic Christmas tree, tinsel, and other winter-y displays. (Might I even dare say… Christmas decorations in malls here are more impressive than those in the US.) Anyway, the Christmas light show was amazing — the performance (?) lasted about 10 minutes and was a mash-up of many holiday songs, including but not limited to Jingle Bells, Do You Want to Build a Snowman, Sleigh Ride, and All I Want for Christmas is You (the finale song). The lights on the Supertrees matched pretty well with the music, and Alix and I had an amazing view since we were right at the top. 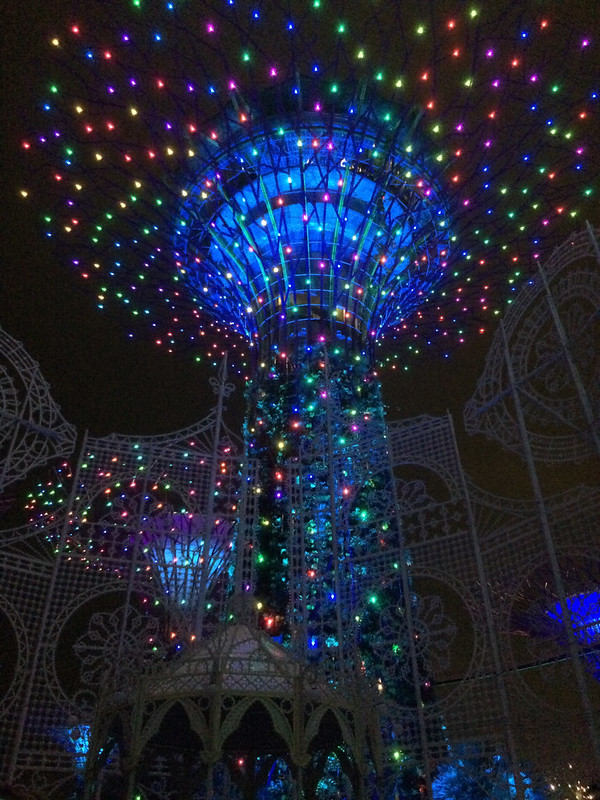 I would have to conclude that I don’t necessarily regret going to Singapore — I mean, it’s not like I get the chance to go to the country for less than $200 USD round trip every day. I was happy I went, in fact. There was a lot of food to eat and culture to learn about. It didn’t hurt to spend some time with nature, either. I’m just glad that it was the last of my trips abroad before the end of the term. I can’t possibly take any more time NOT studying.