Until like a minute ago, I was struggling to come up with a blog post idea. These current few weeks are revision and final exam week here at CityU. A big plus about this university is that they give students a week of revision (a nice thing that is totally different because I’ve had material taught to me on a Monday and was tested on that material in the Wednesday final exam). Finals are spread out over two weeks, which means that although you’ll be in agony for two weeks, you have more time to study.

I was going through the photos on my phone when I realized I haven’t gotten around to talking about an actual dim sum experience. I described it before in blog post #23 as “a traditional Chinese food which involves a lot of bite-sized food in bamboo steamer baskets.” I’ve gotten dim sum at two different places in Hong Kong so far, one time at Kung Fu Dim Sum and just a few days ago at One Dim Sum. This second place, according to a sticker proudly displayed on its door, was recommended in the 2012 Michelin guide. I’ve been meaning to go to Tim Ho Wan for dim sum, which is actually a currently-Michelin-rated restaurant, but somehow… Haven’t gotten the chance to. I’ve been meaning to try dim sum in Hong Kong, where it is known for being good. But if you actually ask me if I’d had any life-changing experiences with Hong Kong dim sum, I would say… Probably NOT. However, this should not stop anyone from trying dim sum, especially if you haven’t had it before. My family and I go to eat dim sum often enough in Philly, so none of this is new for me. However, when I went with the other exchange and international students for dim sum, they seemed really impressed by it!

The dim sum I’m used to in the States involves crowded, noisy restaurants with tons of children running around during dim sum brunch. The thing that stands out the most are the waiters and waitresses pushing carts with the bamboo steamer baskets piled high around the restaurant. Once they reach your table, you tell them what you want from their cart (some people have porridge carts, others have a dessert cart, and so on). They give the dish to you and mark it on your check, then move on in their cycle. The dim sum restaurants that I’ve been to here are just like any other restaurant, where you order and when the food is done, they bring it to you.

Kung Fu Dim Sum in Sham Shui Po was not too much different from what I’ve had back home. Of course, we ordered har gow (shrimp dumplings; the round balls with a slightly pink filling), siu mai (pork dumplings that have the yellow wrapper around them), and shrimp cheong fun (rice noodle rolls with shrimp inside). There were also char siu buns (BBQ pork, a well-known Hong Kong dish). Meh, nothing too special, in my opinion. I felt like I actually had better dim sum in the States, save for the siu mai, which was exceptionally good. 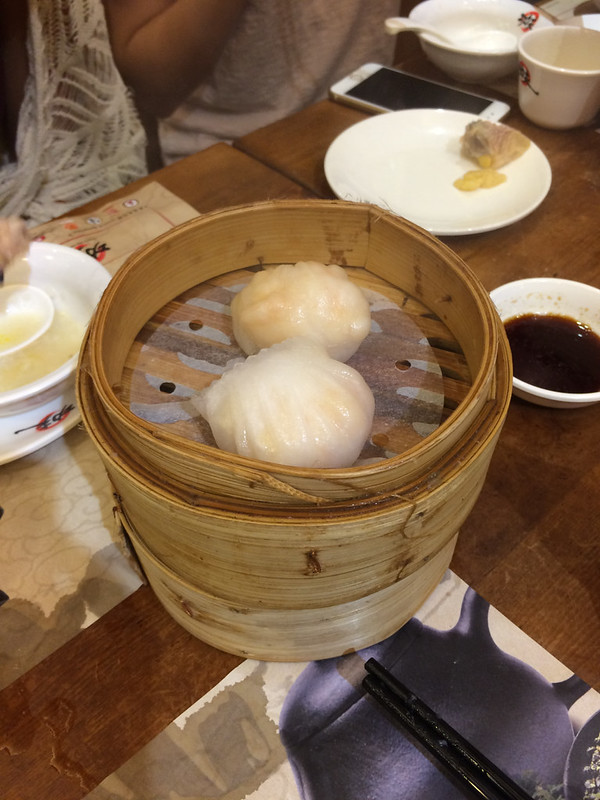 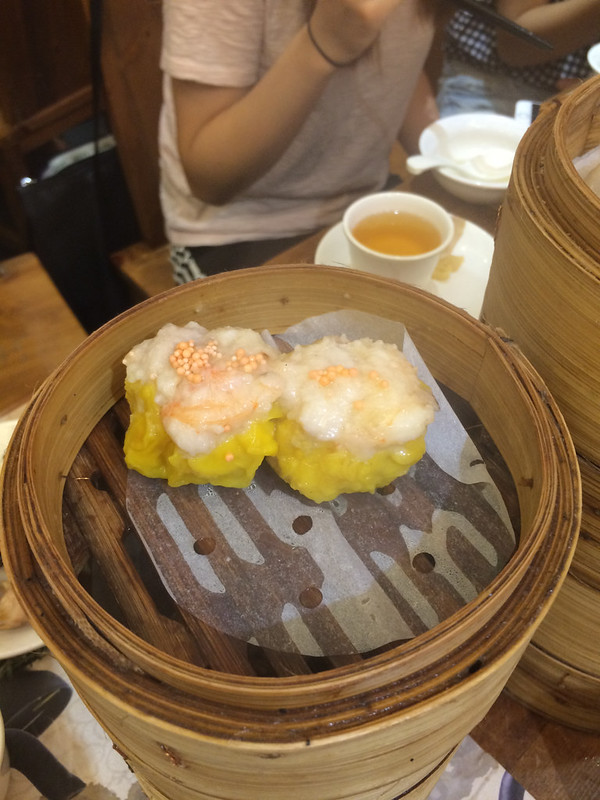 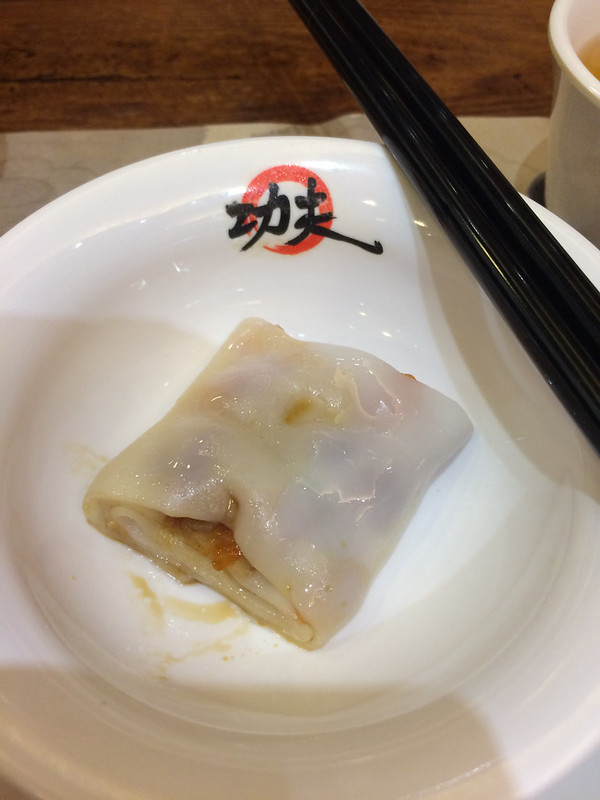 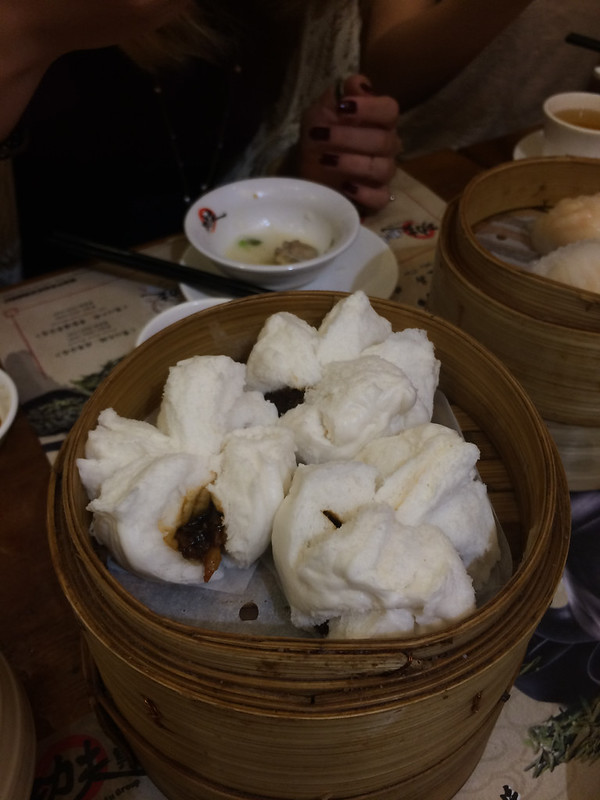 One Dim Sum impressed me, but it was because we ordered a lot of foods that I haven’t usually had in Philly. The first thing that I tried was cheong fun with youtiao inside. Youtiao is a very airy fried dough which is really very hard to describe (solution for you guys who don’t know it: try it when you go to Chinatown!). It was an interesting invention, stuffing a crispy youtiao into something more soft and chewy like cheong fun. I’m not complaining, though. It was really amazing! 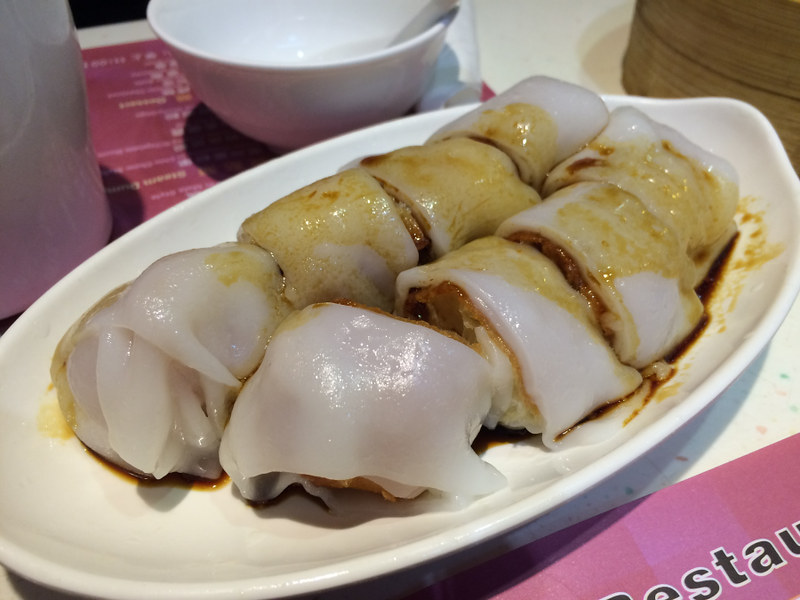 The baked char siu buns here were very sweet and just plain good. Before, I never understood why people loved char siu buns, but after trying the ones at One Dim Sum, my eyes were opened (maybe people have been talking about baked buns instead of steamed buns this whole time?). The har gow and siu mai were standard (side note: they serve siu mai at Hong Kong movie theaters and I LOVE IT. I’ve never ordered it, but to an outsider, I think it’s hilarious). 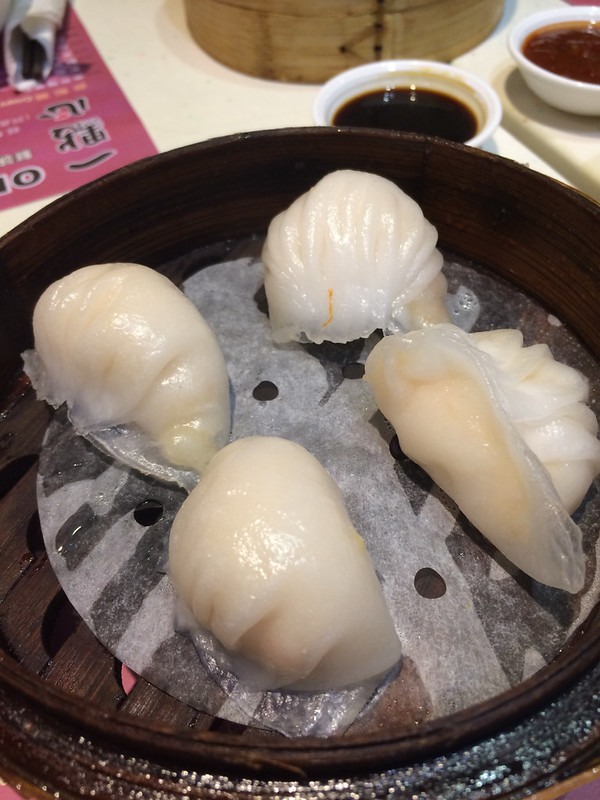 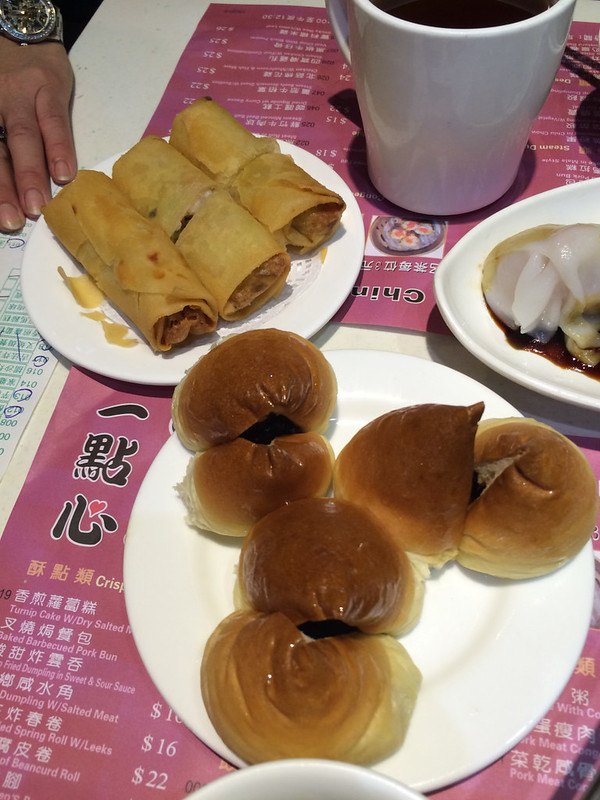 I went with my psychology classmates (L to R: Uranda, Austin, Kate, and Yours Truly) and Austin, a veteran at One Dim Sum, ordered this dessert. I don’t even know the name of it when I ate it. My research indicates that it’s called “fried egg stick.” I think I can compare it to a funnel cake except it’s more… Hard (crispy)… And instead of powdered sugar, were was something like honey topped with sesame-flavored something and coconut flakes. They initially came in huge pieces, and Kate picked one up with a pair of chopsticks, accidentally spilling some of the coconut and sesame seeds onto the table. That was when the manager came over and was like, “STOP, STOP!” and then used a pair of chopsticks to break the egg stick up into smaller pieces. Hahaha. If he didn’t step in, I think the whole thing would have been a disaster. 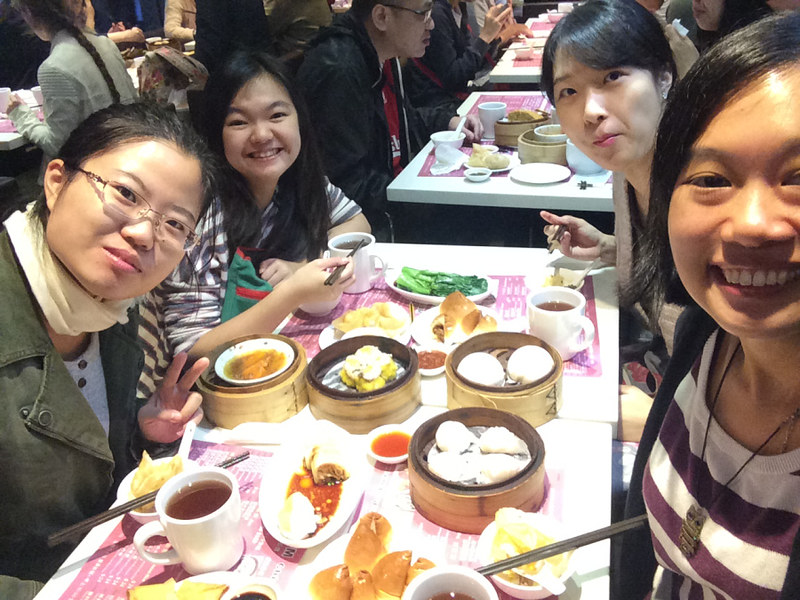 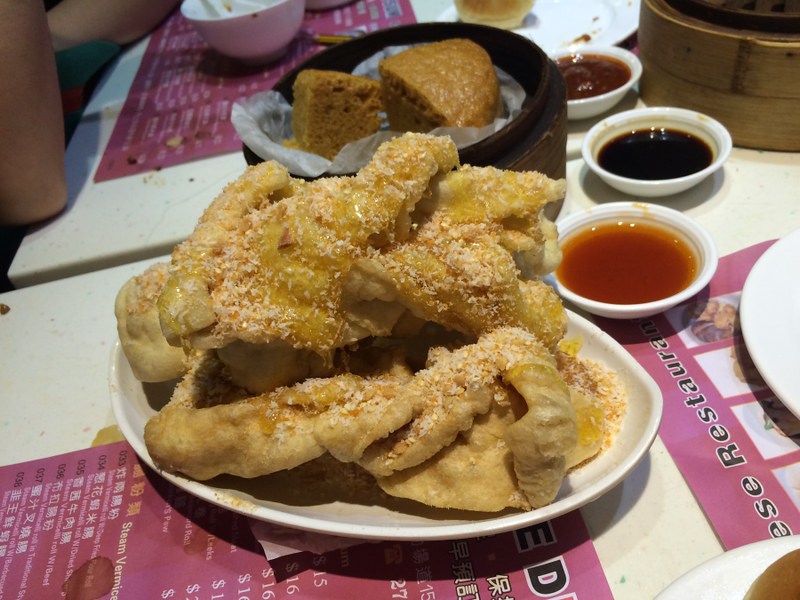 I’m thinking about going back to One Dim Sum if I have time, and I definitely WILL go to Tim Ho Wan before I leave Hong Kong. I refuse to get on the plane without doing so.