Finals weeks have come and gone at CityU, and they were surprisingly very different from finals at Drexel. The university gave students a revision week to help prepare for the exams, which were held over two weeks. This was a nice change, considering the fact that at Drexel we sometimes have class on Monday and are tested in that subject in the final exam during that same week. However, finals are held over a two-week period here, which has its pros and cons. I like that the finals are more spread out, so students hypothetically have more time to study. On the other hand, it’s agonizing to live through two weeks of finals — you just want to be over and done with everything. Some students are lucky and don’t have final exams. My roommate left Hong Kong to go on vacation on December 1st, while my last exam was two days ago, on December 17th.

I didn’t really like how the classes were organized here. (Disclaimer: of course, the classes I took here may have been structured differently from other classes at CityU.) I didn’t have any homework or midterms in ANY of my classes, which meant that I had nothing to motivate me to study until the end of the term. Although it was nice to “relax” for a majority of the term, I actually prefer graded assignments. For one thing, it forces me to study gradually over the term and not cram at the end, and also, I have an idea of how the professor’s tests are. I went into the final exams (always worth half of my grade or more, which was TERRIFYING) blind and it sucked. What’s more is that the final grades aren’t released until the middle of January, so that means that I’ll have a constant pit of worry in my stomach until then. RIP me. 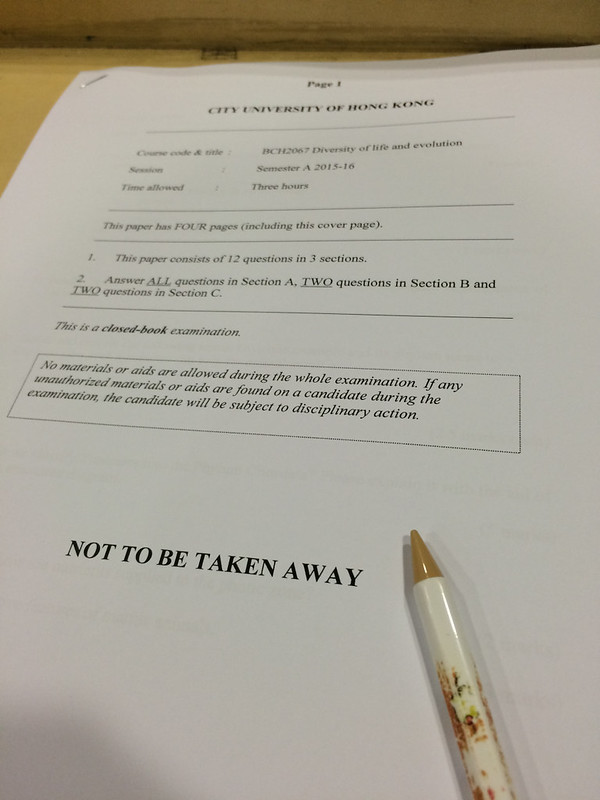 The exam formats are different, too! All of my exams were three hours long. My microbiology and evolution exams contained purely free-response questions, so that meant no multiple choice, just writing and writing and writing. My hand and neck were sore afterwards. My personality and cognitive psychology exams also had free response questions, too, but also contained multiple choice questions. Even the scantrons are different here. Something that was terrifying was that we had no spot to put our name on the scantron. One side of the scantron had the answer sheet and a space for our student ID number. The other side had another place to write our ID number, course code, and seat number. No name. I would always double check my ID number to make sure it was bubbled in correctly. (Also, the bubbles on CityU scantrons are ovals, not circles!)

I just mentioned the seat number — in every lecture hall in CityU, each seat has a seat number. For the final exams, people are required to sit according to their seat number, which is stated on CityU’s equivalent of DrexelOne’s academic tab, AIMS. Having a seat number is pretty interesting. All the exchange and international students were grouped together. People couldn’t switch seats however they liked, though; a proctor would come by and check each person’s student ID card against the roster to make sure the correct person was sitting in the seat. 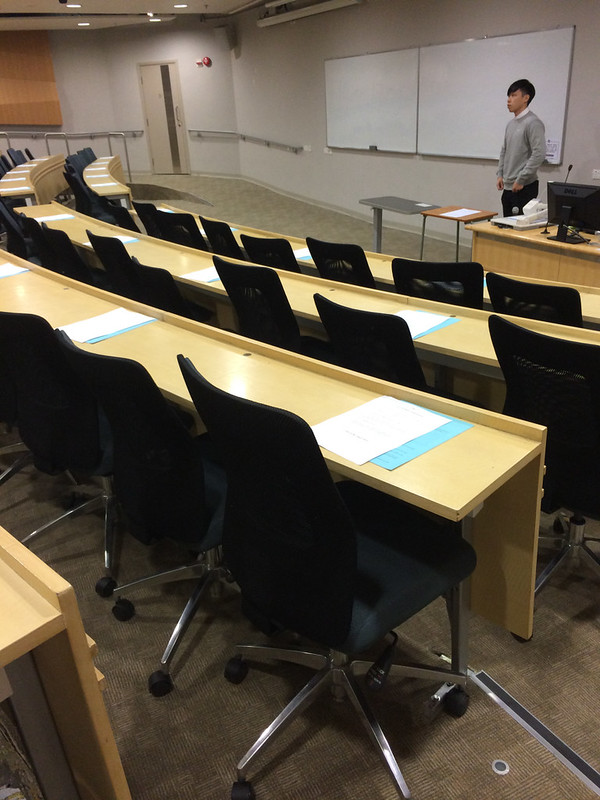 At the beginning of the exam, the proctors would read instructions out loud — the rules would mentioned that cell phones and textbooks must be put in a bag under the desk, no talking was allowed during the exam, and regular things like that which reminded me of the PSATs and SATs back in high school. One thing unique was that the proctors mentioned face masks were available for anyone who showed signs of influenza, which was nice, I guess, and also cute. I also noted at when each person finished their exam, they couldn’t simply get up and hand their exam to the proctor; they had to raise their hand for the proctor to come and collect the test material from them. Additionally, students weren’t allowed to leave the room 30 minutes after the exam  started and 15 minutes before the exam ended, which was strange to me.