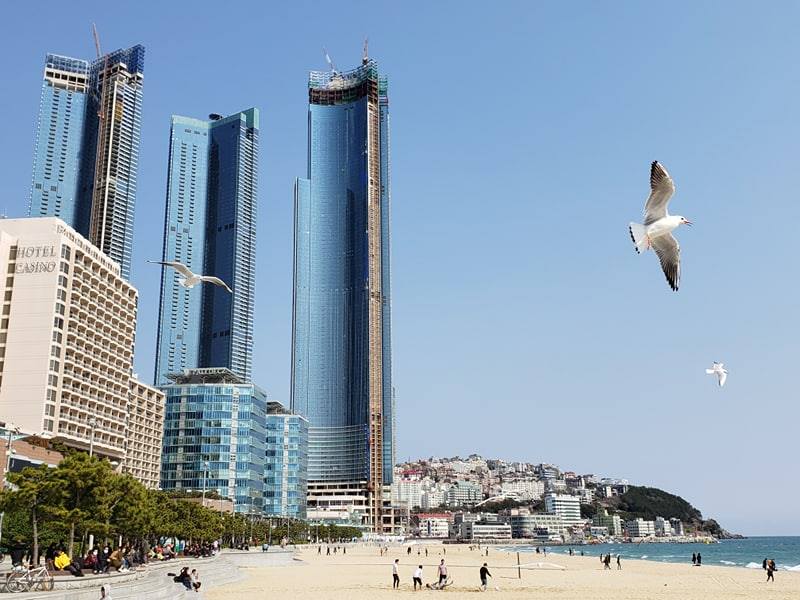 Bus to Busan: the sequel!

As I mentioned on my last blog post, my friend and I spent a weekend at Busan with the main focus of attending a Stray Kids event! To recap, we left our apartment in Sindang at around 9AM and bused to the Seoul Express Bus Terminal. From there, we bought seats on the 11AM Express bus to Busan and arrived there around 3:30PM. Unfortunately, we were not even close to our destination, so we hopped onto another bus to get to Shinsegae Centum City Mall where the event was being held. Unluckily for us, we got drenched from the downpour rain which stopped about 2 minutes later. However, the event was one of my favorite k-pop events I’ve attended, so I would do it all again in a heartbeat!

Come Saturday morning (more like afternoon since it was almost noon by the time we left our hotel), we headed out to explore the area – Haeundae District. A little background on Haeundae – it is most famous for its beautiful beaches and enjoyable seaside activities. With that being said, this district is much more enjoyable in warmer weather, but there is still a lot to discover and see! At first, we were wandering around a boardwalk-esque street when we realized were only 10 minutes from Haeundae Beach! We were wondering why there were so many arcades, games, and street food! And of course, we had to take a detour to this famous beach!

I was surprised how many people actually come out to the beach in such cold weather. It was pretty fascinating to see everyone running around in their winter jackets, playing in the sand and even attempting to go into the water! I’ve actually never been to the beach before (crazy, I know), so I’m glad I got to feel the winter sea breeze! There’s just something so soothing about watching the waves and standing in sand!

After spending time admiring the beach view, we stopped by the beach’s aquarium, which was our original destination! Haeundae’s aquarium is one of the largest in South Korea, however, it was quite small in comparison to those located in the United States. Of course, that doesn’t make it any less perfect! Once we entered the aquarium area, it felt as if we were teleported into a magical wonderland. There was rows and rows of tanks and I saw a bunch of fish I’ve never seen before! I think one of my favorites were eels that basically buried themselves; thus, they stick out of the sand and they kind of looked like drinking straws. It sounds weird and is probably unimaginable, but that’s the best I can describe it! Unfortunately, I did not get a picture of this, so they will forever be a mystery! And of course, I had to get a souvenir to represent my trip to Busan which you can see in the gallery below!

Overall, I really enjoyed the trip, despite how cold and rainy it was. Hopefully, the next time we travel all the way to Busan, it will be warmer and we can enjoy to its full extent!!

View all posts by Sabrina Chue